Recently I noticed in an NEHGS Newsletter that there are now many Nantucket Newspapers available online.

Isaac Parker moved to Nantucket probably around the year 1800. He died in 1842, before the the Nantucket fire of 1846. That means that I would be interested in the earlier newspapers.

The first relavent entry I found while searching for Isaac Parker was a sad one:

This would be Isaac’s youngest daughter:

Here is a death notice for Prudence Parker:

I mention Silas Parker on my web page on the Parkers. He was the uncle of Isaac Parker: 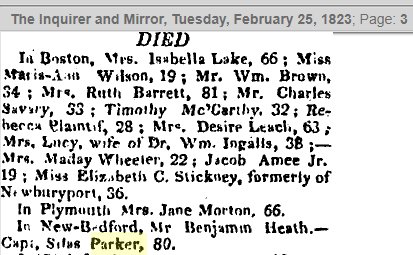 Some Business for Isaac Parker in 1825 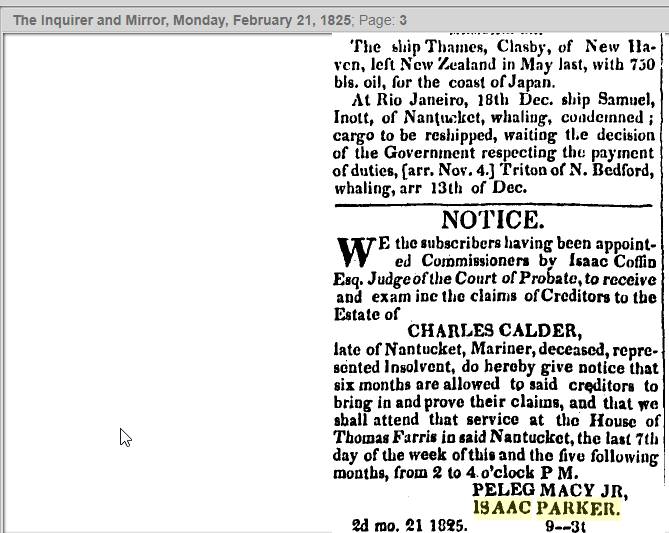 I’m not sure what this was all about. Apparently Charles Calder died while owing a lot of money. I would also assume that he did not owe money to Isaac Parker, but I’m not sure.

Isaac died in 1842. It took over a year after his death to sell the property. The Nantucket Fire of 1846 likely burnt down the house. I have more information on the sale of this property in this Blog.

I had that Isaac’s youngest was Benjamin, but he died as a baby in 1802.

I have Elijah born next in 1803. He was my third great-grandmother’s brother. The 1850 Nantucket Census has him as a ship master. Perhaps this is him: 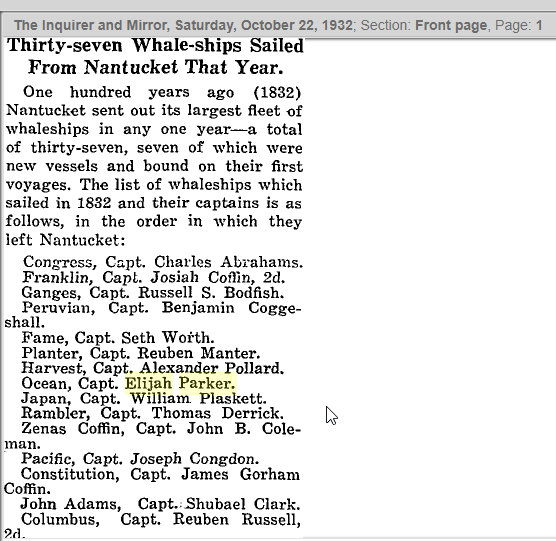 From what I can tell, Callao is in Peru. Here is Elijah’s wife and two children in 1855 in the Census in Nantucket:

They were living with Betsy and Elizabeth Joy. I assume that these were relatives. I also assume that Elijah was out at sea at the time. 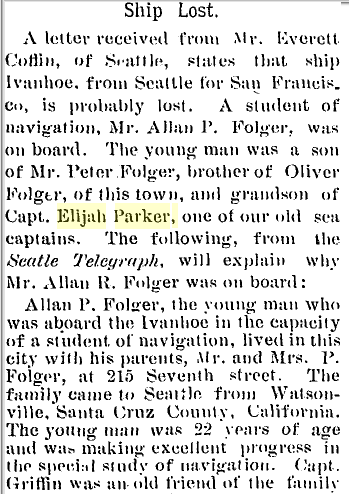 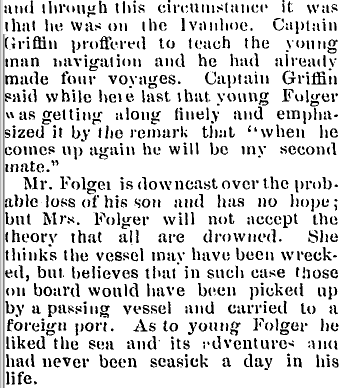 This article gives us some more family information than I had on my web page:

By checking around on Ancestry, I see this: 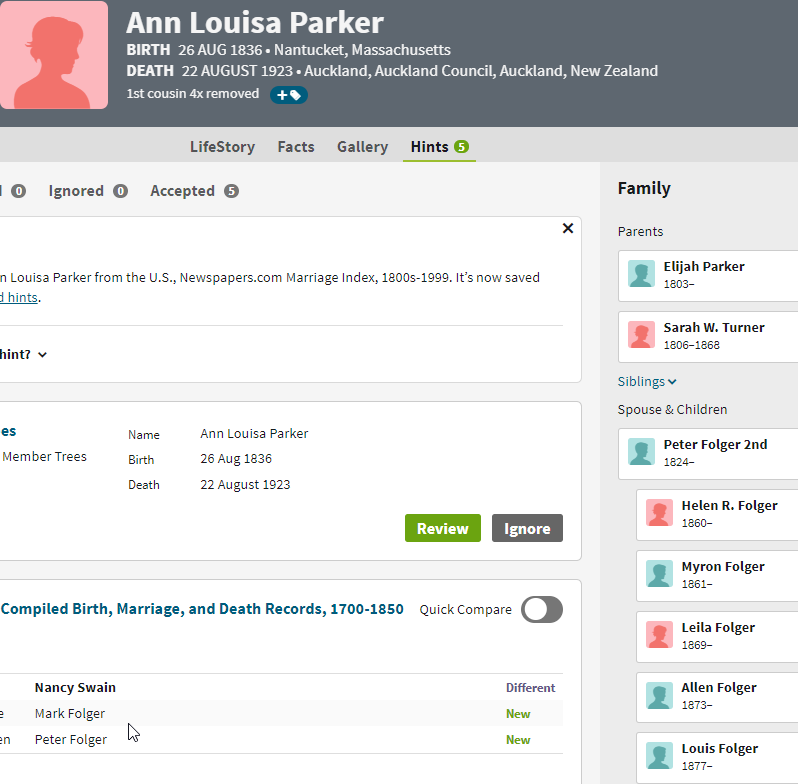 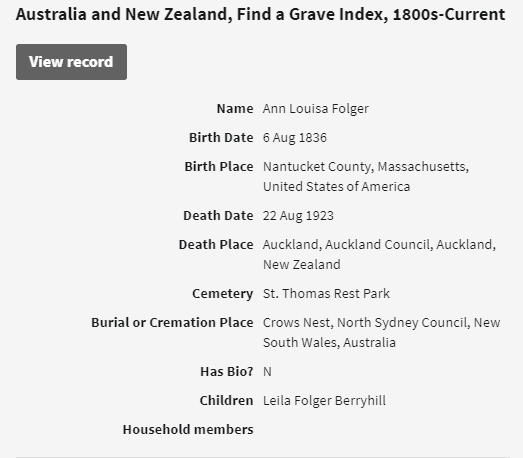 I assume that she followed her daughter Leila to Australia. . 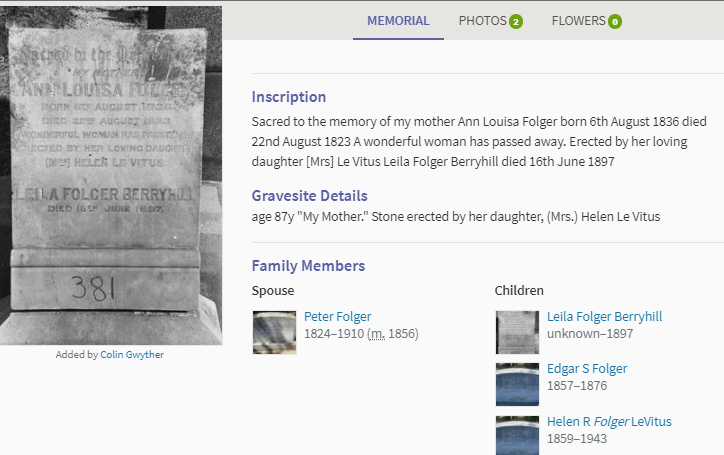 Here is Aukland and Sydney: 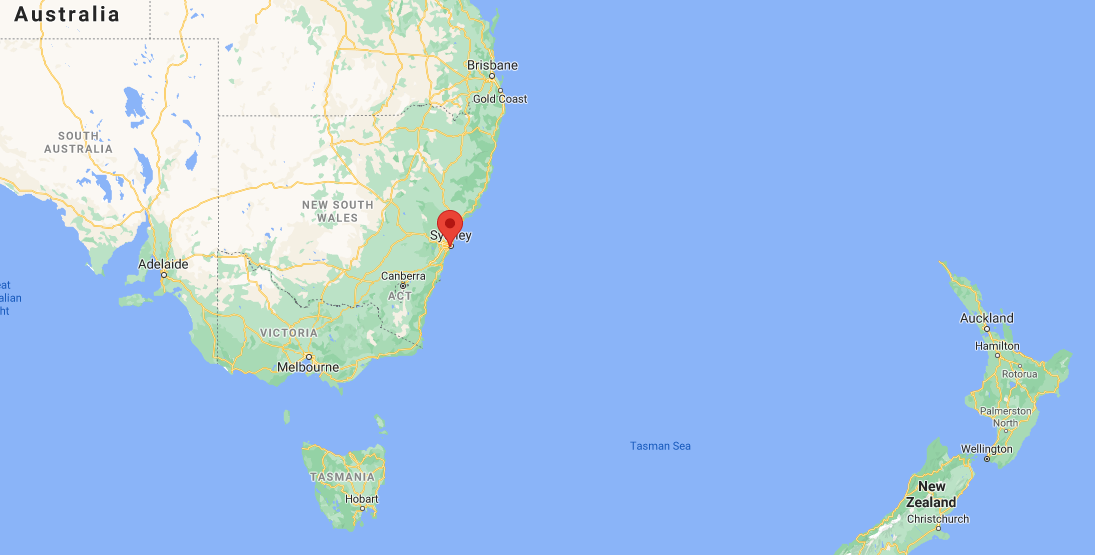 This part of the Parker family really got around.

My web page has a very incomplete picture:

It turns out that Isaac Junior’s wife was a very interesting person: 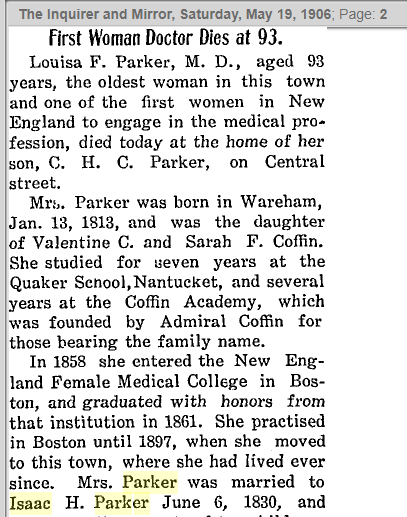 Looks like I missed 8 of their children on my web page. The newpaper article has her dying in Nantucket, but her death record makes it appear that she died in Weymouth: 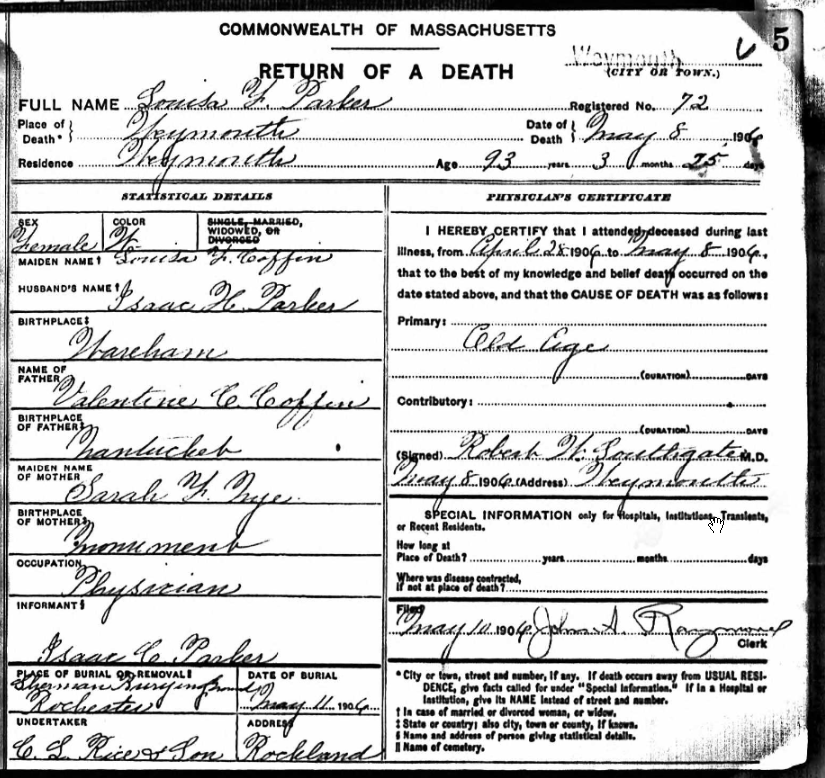 The death certificate also has her buried in Rochester:

She was apparently buried in the Sherman Cemetery where many of my Hartley ancsestors were buried. She was born in Wareham, married in Nantucket, died in Weymouth. I wonder why she was buried in Rochester.

AncestryDNA shows ThruLines. Here are mine with Isaac Parker Sr:

This shows that I am a 5th cousin to td and share 42 cM.  According to the Boston Census of 1870, Pardon was a barber:

William Henry above was born in Malden.  So of all the Parker paths, I could have shared DNA with, this is the one that shows up. Of course, a descendant had to have taken the test for me to match. 42 cM is a large amount for 5th cousins to share.

These newpapers articles tend to take me back to the time when all this was happening. There was not a lot in the newspapers about this family, but the family was not on Nantucket for too long and mostly left after the great fire in Nantucket. I found out a lot more about this family – what they did and where they went. I looked at one 5th cousin who matched by DNA. I was also able to better fill in my Parker family tree. This could lead to more ThruLine connections at AncestryDNA.