My father’s cousin Maurey recently had a DNA test at Ancestry. Then his daughter Holly uploaded those results to Gedmatch.

Here is a tree showing those in the Hartley family that have had their DNA tested. Others have tested at AncestryDNA, but Ancestry does not provide specific information on which chromosome the matches are on. 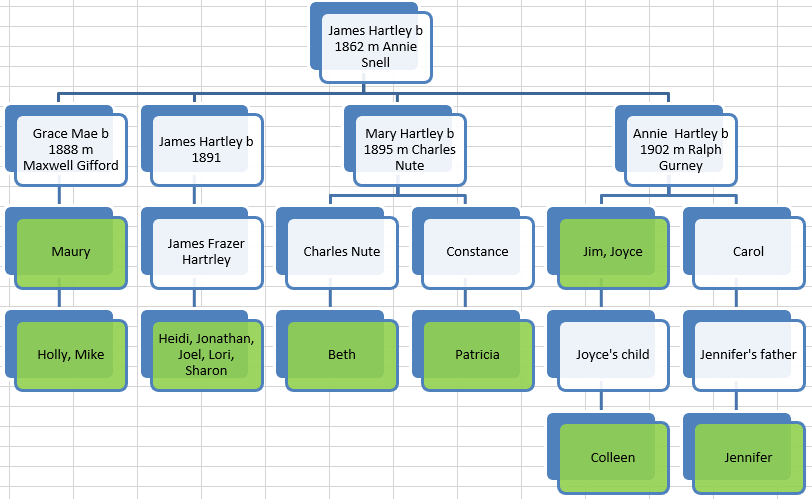 Maury is in the line on the left. I had previously had Jim and Joyce tested. They are both children of Annie Hartley. Here is a photo of some of the Hartleys. 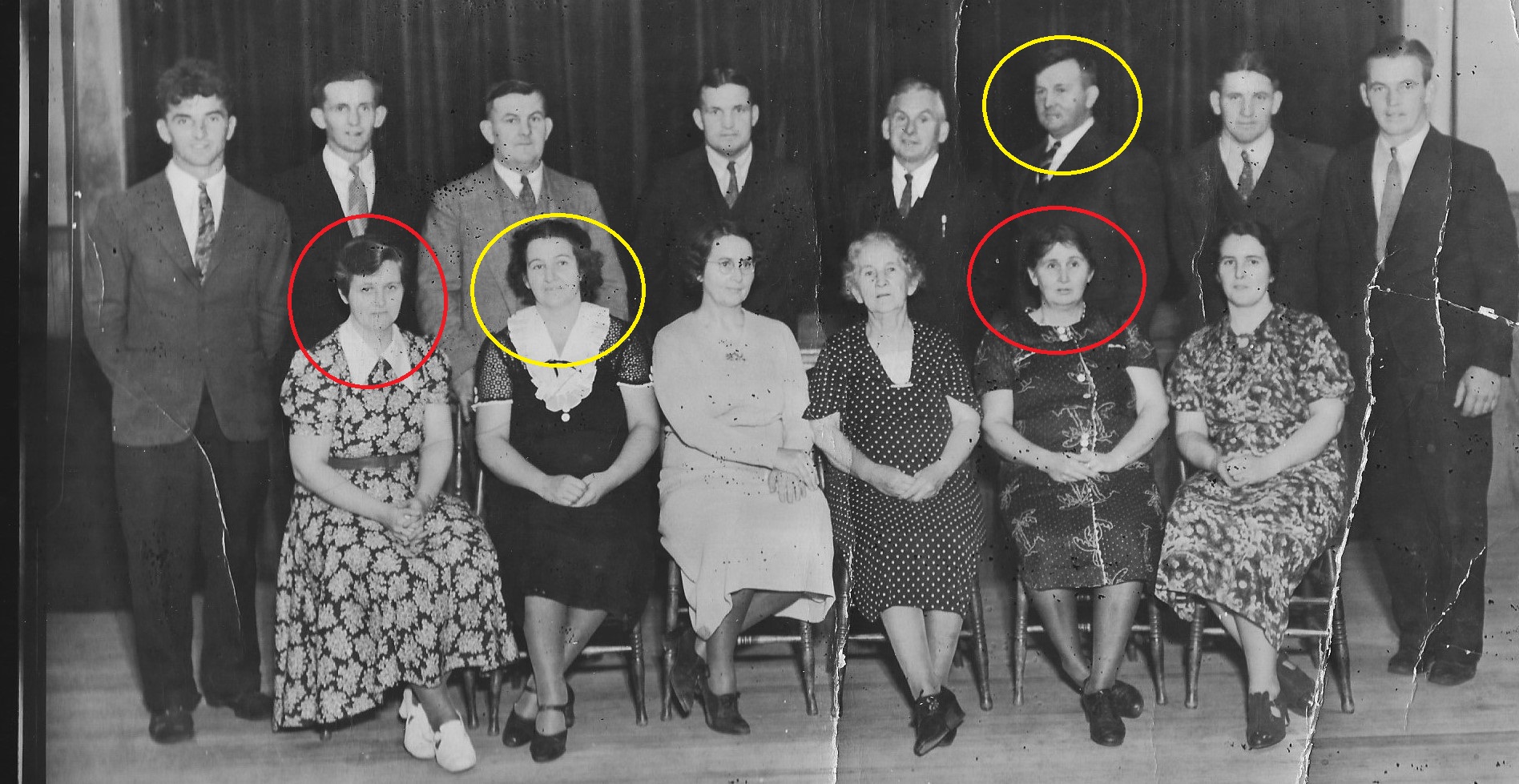 My DNA Match with Maury

Here is what my match with Maury looks like at gedmatch: 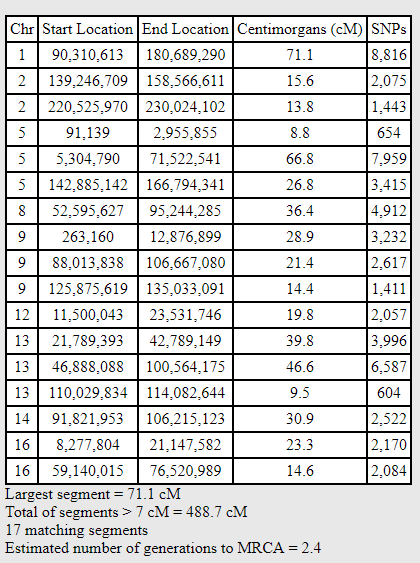 Here is a photo of me in the front of the boat and Maury’s nephew Tom steering in the Mattapoisett River Race. From memory I was in 8th grade. I believe that is Maury standing on the left.

My Paternal DNA Map before Maury: 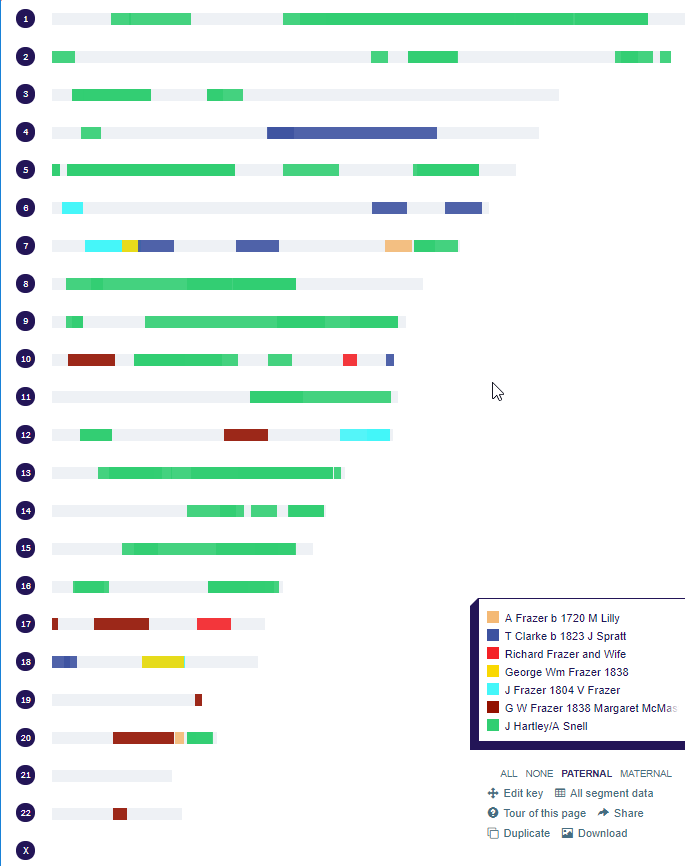 This shows that 46% of my paternal side is filled in. On my maternal side which I don’t show above, I have only 20% filled in. When I choose just the green matches which represent my Hartley/Snell DNA that I share with cousins, the DNA Painter program says that “represents about 17% of the base pairs in this profile”.

Maury actually did not add much more Hartley DNA. I already have a lot of Hartley DNA matches. However, he did bring my mapped DNA up from 32% to 33%. That means, that overall, between my mom and dad’s side one-third of my DNA is mapped. That is a bit of a milestone. 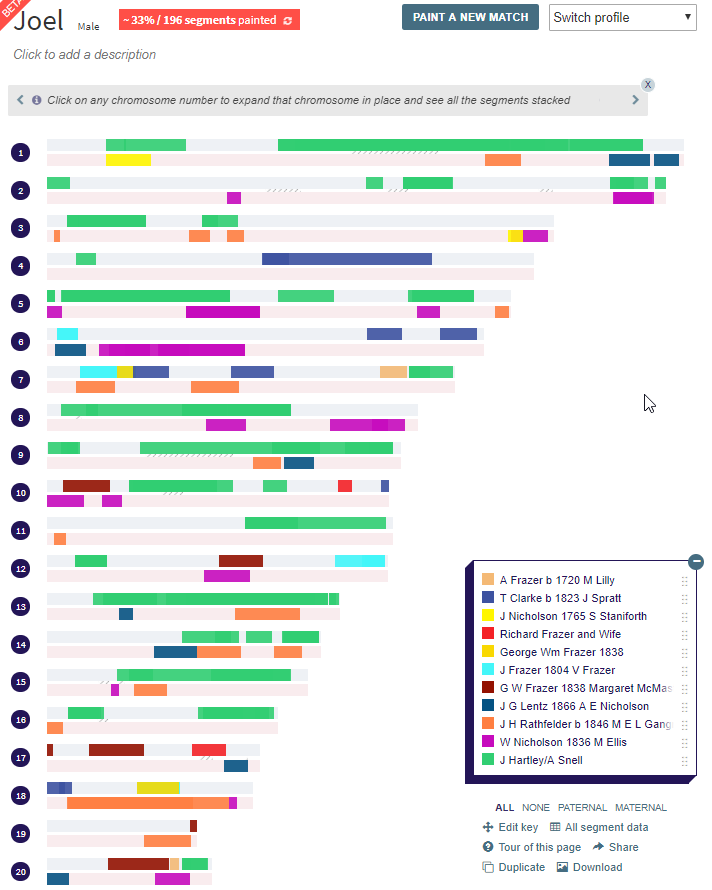 Here is a DNA tree of the Pilling Line: 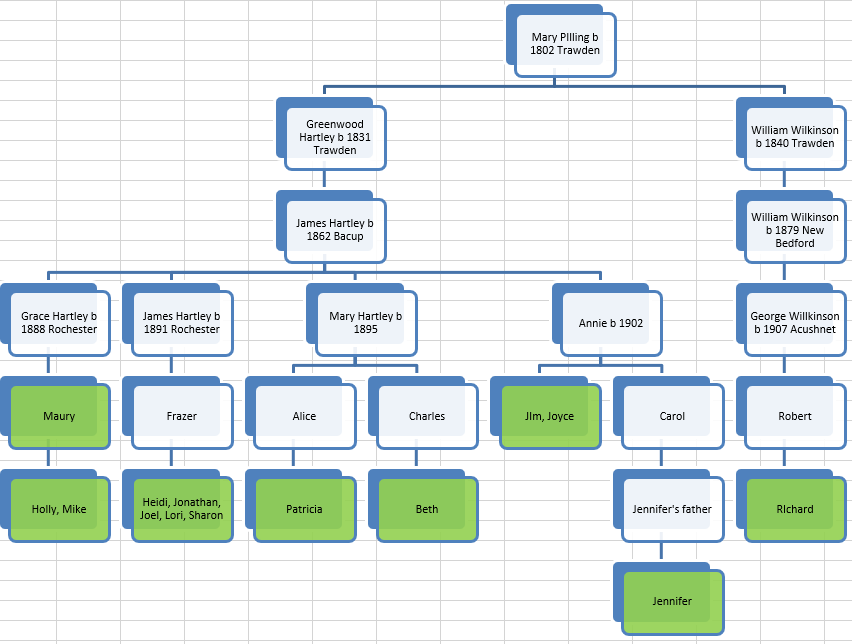 Maury is in the line on the left. The line on the right is from William Wilkinson. Mary Pilling married Robert Hartley. Robert Hartley died young. Then Mary married Robert Wilkinson and had another family. Richard descends from that side. That means that any Hartley descendant that matches Richard can know that they match Richard with Pilling DNA and not Hartley DNA. That is because Richard has no known Hartley DNA.

Here is how Richard matches Maury on Chromosome 19:

The orange bar is the match between Richard and Maury. The small blue match is between Richard and my brother Jonathan. The orange match is 53 cM and takes up most of Maury’s Chromosome 19. So Maury has a pretty large hunk of DNA from his 2nd great-grandmother, Mary Pilling. That DNA made its way intact through Greenwood Hartley, James Hartley, Grace Hartley and down to Maury. Mary Pilling played a big role in the history of the Pilling, Hartley and Wilkinson families. She lived in Trawden, Bacup and finally crossed the ocean as an elderly woman with the Hartley and Wilkinson families, finally dying in New Bedford.

Here is how Maury matches some of his cousins by the X Chromosome: 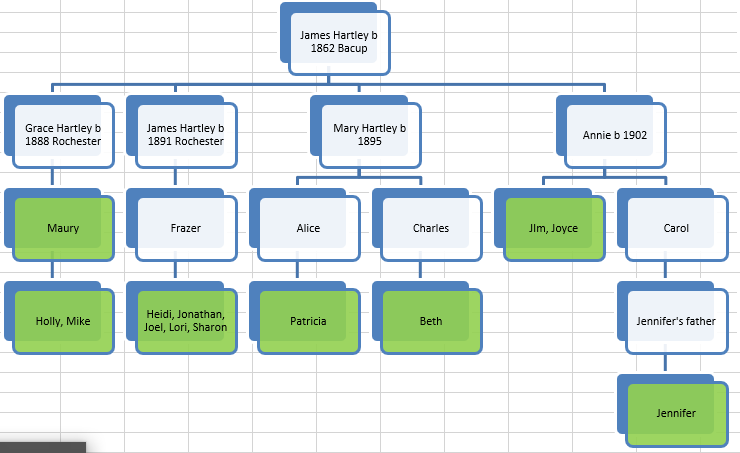 The matches represent either James Hartley or his wife Annie Snell. Note that Maury doesn’t match me or my 4 tested siblings. That is because the X Chromosome does not travel from father to son. My grandfather had one X Chromosome but that got passed down to his daughter, not his son.

I circled the middle area of Maury’s X Chromosome matches above. It appears in that area the DNA he got on his X Chromosome switched from Hartley to Snell or the other way around. If I were to test my paternal first cousins, then they would have Snell X Chromosome and not Hartley. That is because, they descend from my grandfather’s daughter. She would have an X Chromosome that my grandfather got from his mother who was Annie Snell. Any of the Hartley relatives that matched them would then know that match was on the Snell side and not the Hartley side.

Here are some of Maury’s top unknown X matches. I would like to know if they are from the Hartley side or Snell side. My guess is that most of them will be from the Snell side as there would be more people matching on the Colonial Massachusetts Snell side compared to the Lancashire, England side. 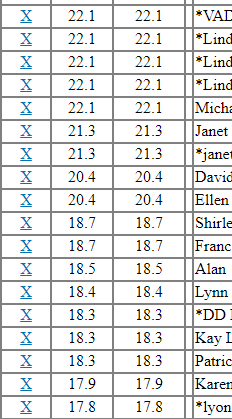 When I choose these people in a Chromosome Browser, the matches look like this:

Again, this is my guess. It has not been proven by contacting each match and checking on their ancestors.

Maury and the Howorth Family

Who are the Howorths? Greenwood Hartley married Ann Emmet in Bacup, England. Ann’s mother was Esther Howorth born in 1800. 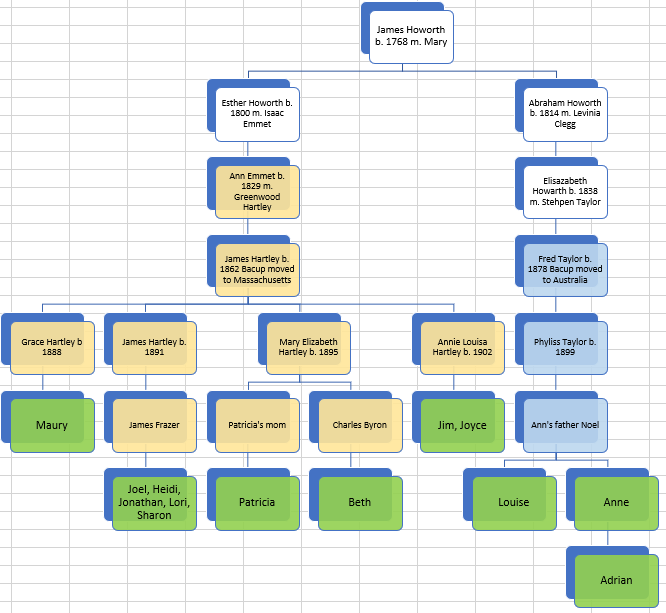 Maury is on th left. There is a family on the right that matches by DNA. They also descend from the Howorth family. They descend from Abraham, the brother of Esther and live in Australia. Here is Maury’s DNA match with Anne of Australia:

Other Hartleys have matches with this family, so all the matches likely represent Abraham Howorth, born in 1768 or his wife Mary.

Who Was James Howorth’s Wife Mary?

I don’t have a name for James’ wife Mary. That would be nice to know. Looking at Ancestry trees, I don’t get a clear answer. Here are the children I have for the couple: 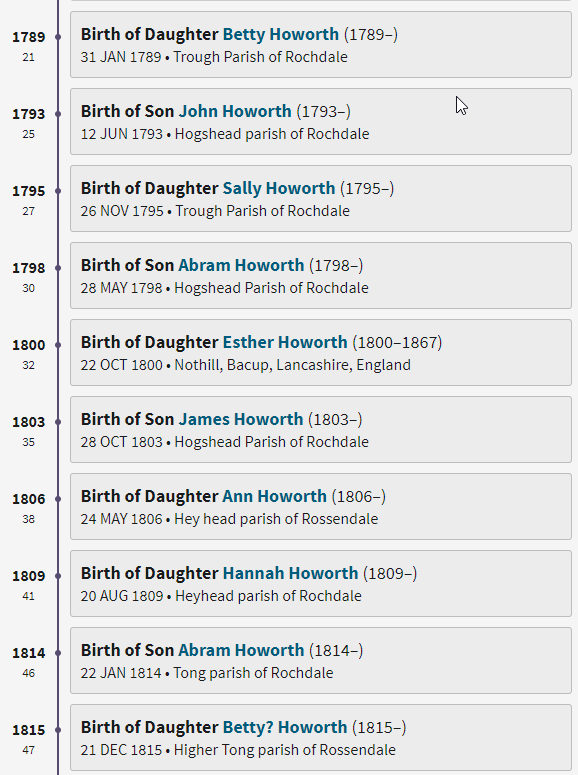 Hopefully, these are all from the same family. Ancestry has hints for Mary. For Betty and Abram, it could be that a child died and a subsequent child was given their name in their memory.

The hints for Mary at Ancestry.com show that Mary was Mary Hargreaves. However, it shows her marrying a John Haworth. So, unless John and James were the same person, that would not be right. This is likely the John and Mary couple that Ancestry gives as a hint:

There appeared to be Hargreaves also living in Trough.

I’ll look at a website called Lancashire Online Parish Clerks where I got the information from the previous screen shot. I would think that Abraham and Mary married about 1787. When I enter a search for James Howorth marrying a Mary, I get 311 results.

Here are some of the best candidates: 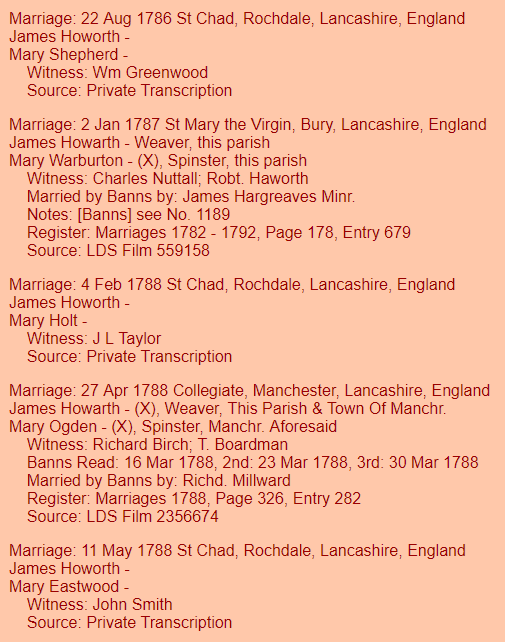 I would favor the Rochdale listings as Bury and Manchester were further away. That leaves Shepherd, Holt, or Eastwood as the last name for Mary. I’ll make the assumption that Mary was the mother of all the children above. The last child was born in 1815 when James was 47.  I’ll say that Mary was three years younger than James and was 44 when her last child was born. That would mean that she would have been about 18 when she married. That would put her birth about 1771.

Here is a Mary Shepherd:

Here dad was Richard and her mom was Ellin. I would have thought that she might name some children after her mom or dad if this was the right Mary.

There are too many Mary Holt’s in the records. Here is one guess:

I like this Mary because her dad and mom were John and Betty. Mary’s first two known children were Betty and John. As I understand it, Bacup was originally not much of a place and Spotland was more of the area. So this my be a good place for an ancestor to be born.

Here is a map of historic Spotland (before 1850) from http://www.genuki.org.uk/big/eng/LAN/Spotland/ParishMap: 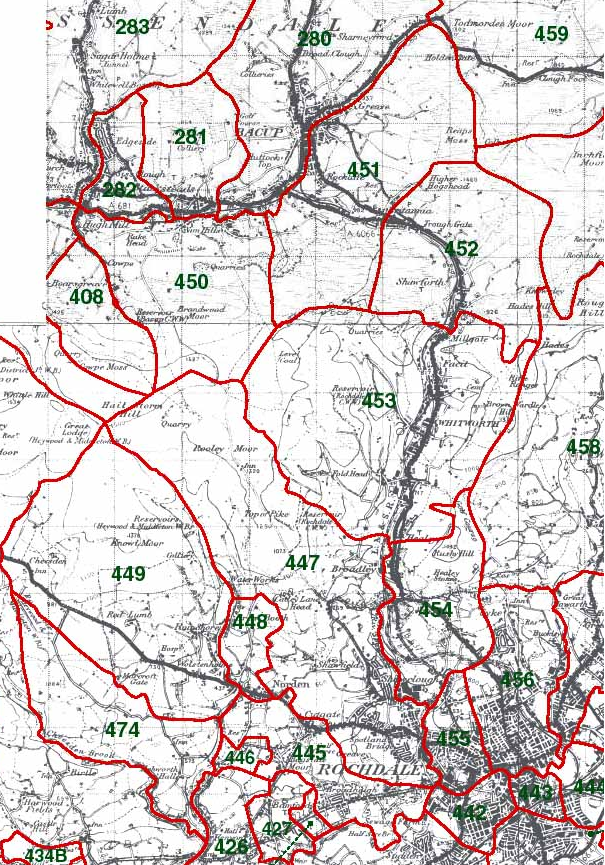 This is copied from the website as the areas of Spotland:

Two areas that I will be looking at later in the Blog are 451 and 452 to the South and East of Bacup.

Here is a possible Eastwood choice:

Again, Mary Howorth did not name any of her children Richard or Alice that I know of.

As stated above, I am leaning toward Holt for a new Hartley ancestral name.

Back to Esther Howorth

Where was Esther Born?

There is some confusion as to where Esther was born. Here is the online record:

I’ve looked at the original record and saw no note about Nun hill. There is a Nun Hills to the west of Bacup. There is also a Knothill. The Bacup Weslyan records have reference to a Knothill:

However, my understanding is that Spotland was a ways away South near Rochdale.I also see in the Weslyan records an interesting reference to, “Knothill Nook near Shayforth”

There is a Shawforth near Trough and Hogshead, so perhaps this is the place?

I think I found Knot Hill. I assume that Knothill Nook is even more specific than Knothill. I appreciate the meticulousness of whoever recorded that record. This map is from http://www.visionofbritain.org.uk/

Also in the process, I have found Trough which I had trouble finding previously. I had assumed that Trough Gate was close and it is pretty close to Trough. The trick is finding an old enough map with enough detail. For some reason I get a lot of joy in figuring out where my ancestors lived. So, I’ll say that in 1800 at least, the Howorth family was living at Knot HIll aka Nothill. One problem is that place names have changed over the years. I would have to say that being born at Knot Hill sounds more prestigious than being born at Hogshead or Trough.

So. the next time you are in Bacup, look for Knot Hill. Take the A671 from Bacup going South toward Rochdale. Knothill should be between Trough Gate and Shawforth. If I am ever in the area again, I would like to get out of the car there and walk around.

Esther was listed as living in a different place in 1821: 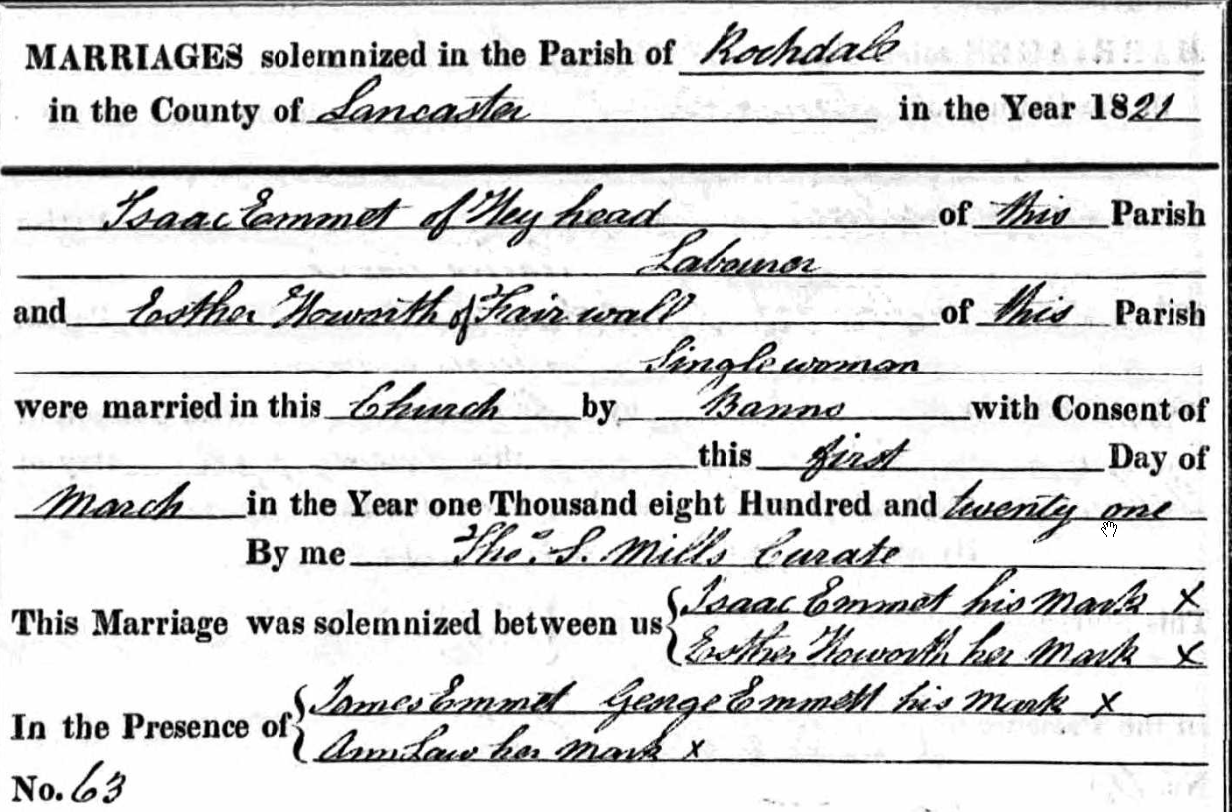 She was living in “Fair wall”. The groom was living in Hey Head. That is where I had the Howorth family living in 1806 and 1809. I’m not sure if the family moved about a bit or if the location was reported differently (that is, with different levels of precision).

It looks like Fair Wall was indeed a place, but where? 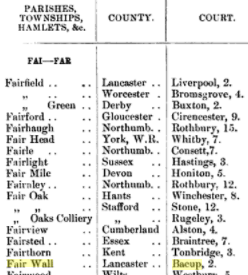 The above publication was from 1888.

Here is a detailed map from 1890 to the East of Bacup:

One Hey Head Or Two?

I just noticed something today:

At this point I would be willing to go with what is behind door number three. I also note that Isaac Emmet was from Hey Head in the Parish of Rochdale at the time of his marriage.

I had already given up on Nun Hills in favor of Knot Hill as per above. Now I am giving up on Hey Head which is further to the West in favor of the Hey shown below.

That leaves all the Howorth family living as per below in the purple circled locations. I have managed to round them up into areas to the South and East of Bacup: 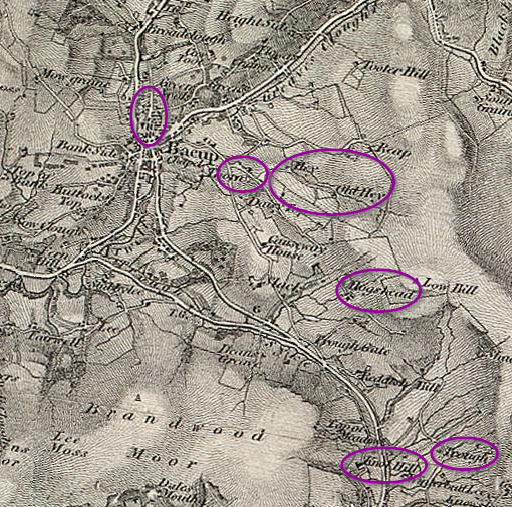 It is unclear to me whether the family moved around a lot or if the places where they lived were listed inconsistently. Hogshead is listed three times for Howorth births which is more than any other location. This is somewhat central to the other locations. This revised version of where the Howorth family lived holds together better than the version at my Howorth Web Page.