23andMe has a new feature. It tries to predict your family tree based on DNA alone. Here is mine:

This tree looks like it could have been designed by Dr. Seuss. It turns out that this is at least potentially helpful as I have had trouble figuring out who is who at 23andMe.

My guess is that the left hand side is to represent my mother’s side. My right hand side is my paternal side. However, a closer inspection of the tree shows that to not be the case. 23andMe gives you the opportunity to add some known ancestors in:

Iain to the lower left of me (JH) is right. He descends from my mother’s Uncle Leo from Latvia. However, other of my mother’s relatives are listed on my father’s side.

Probably a good strategy for determining a paternal or maternal side is to go with the largest group. My Hartley/Snell grandparents had 13 children and most of them had children. So I picked that group to be the paternal side. This happened to be on the right-hand side of my 23andMe DNA Tree: 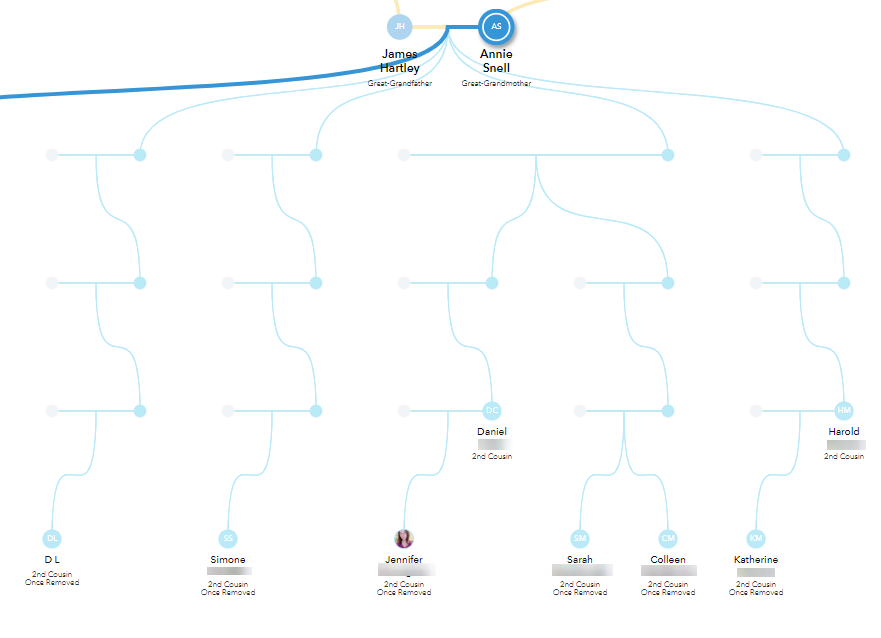 Daniel and Harold are rightly placed on the same level as me as second cousins. I suppose that it would be fun to try to fill this part in a bit. I’m familiar with this family on the right: 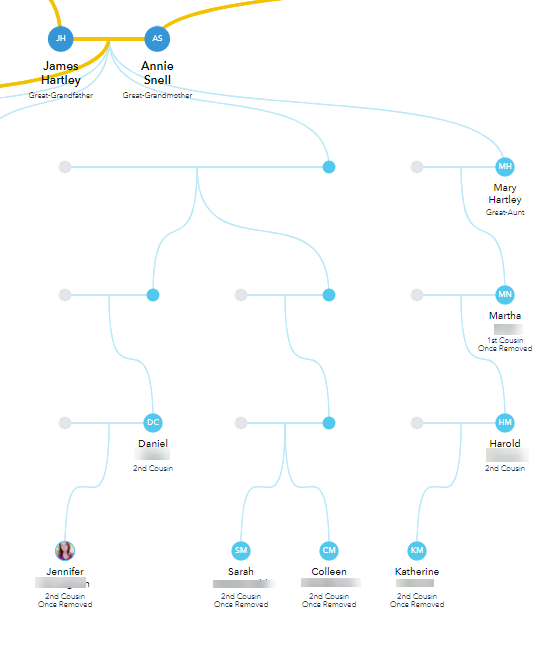 Mary Hartley was my great Aunt Mary and lived close by when I was growing up.

Fixing Mistakes in the Tree

It looks that it may be possible to fix mistakes in the future:

It’s not as much fun building out the tree when you know it is wrong. Here is my second cousin Judy:

She descends from my mother’s grandparents Lentz and Nicholson. Here she shows as descending from my father’s great-grandparents Snell and Bradford.

Even though Judith is shown on my paternal side, this relationship appears relatively correct: 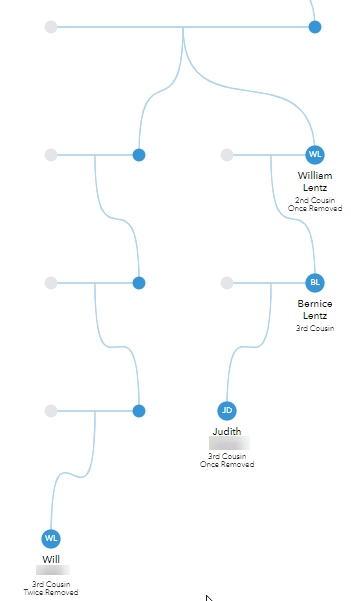 Will and Judith’s ancestos would be my mother’s grandparents Lentz and Nicholson. However, as 23andMe does not show that couple as my direct ancestors, they do not give me the opportunity to enter both ancestors.

Gail On My Family Tree

Even though Gail should be on my maternal side, I figured out who she was by looking through my messages: 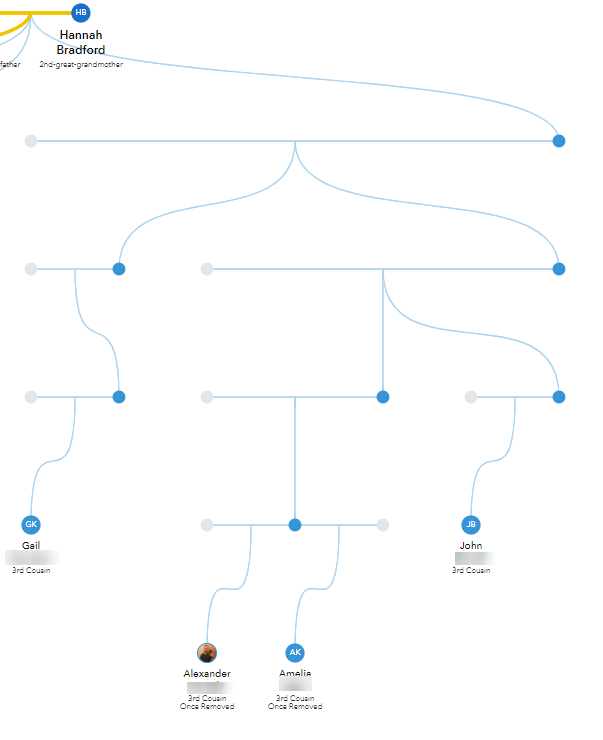 Gail actually descends from the Nicholsons. In fact, I already had her on the right hand side of a Nicholson chart I created: 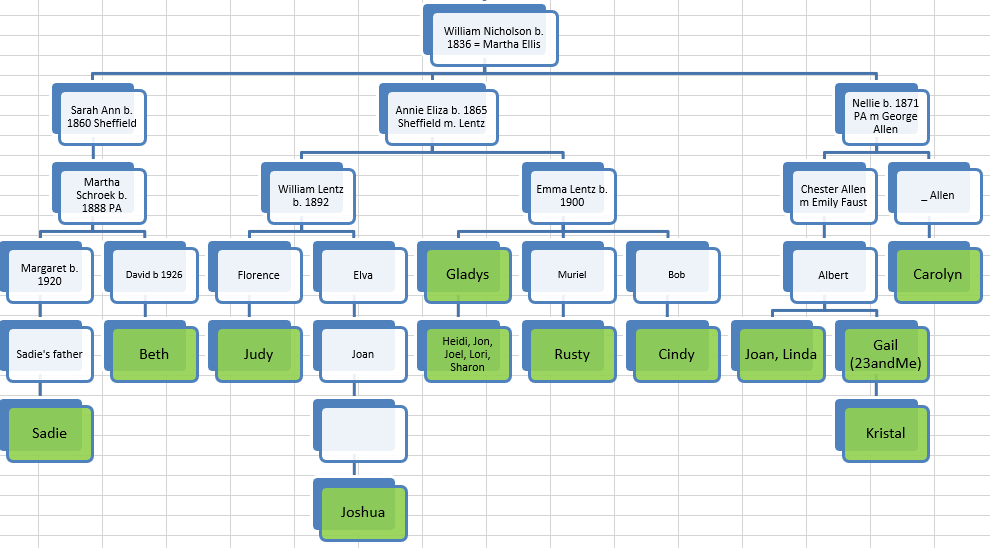 As Joan, Linda, and Gail are sisters, it would be possible to perform visual phasing on their DNA results. I added to my chart that Gail was on 23andMe, so I would remember. 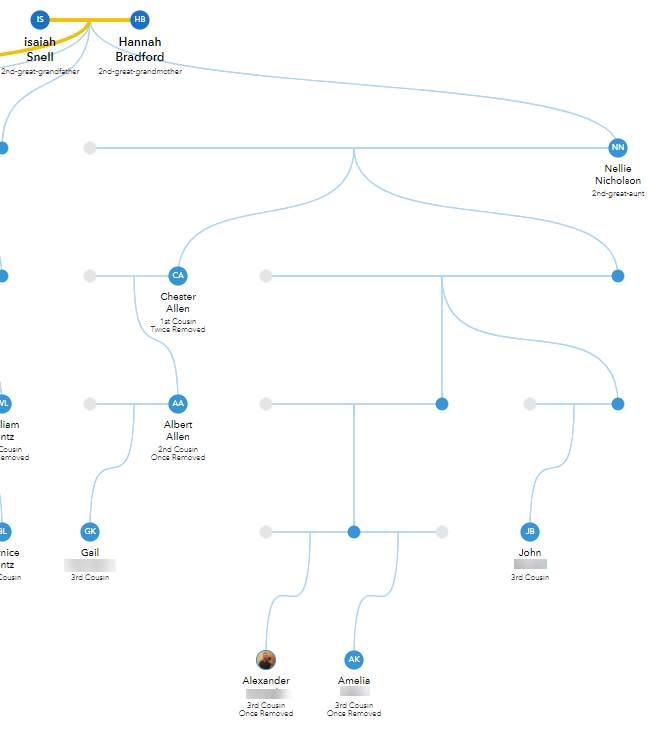 My guess is that Alexander, Amelia and John descend from Nellie Nicholson. Nellie was the daughter of William Nicholson of Sheffield, England, not Isaiah Snell of Rochester, Massachusetts.

Sorting Out the Hartley Branch of the 23andMe Tree

I think I have figured out who Charles is: 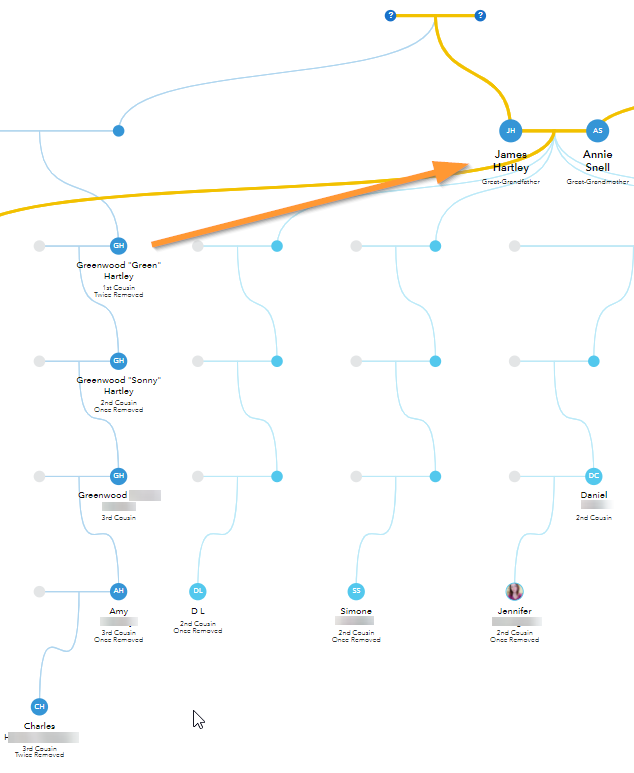 Charles should be my second cousin twice removed. The DNA Tree shows Charles as my 3rd cousin once removed. Here is the DNA that Charles and I share:

Here is Charles added on to my own chart:

Charles represents a seventh child of James Hartley and Annie Snell. The only person who I can’t identify in my Hartley 2nd cousin group is DL. DL must come either from one of the children not shown above or perhaps come more distantly from the Snell family. My great-grandparents had 15 children over a 25 year period. Two died in infancy and two didn’t have children. That leaves 11 children with offspring. I show 7 above, so DL may come from one of the lines not represented above (or from a line that only tested at AncestryDNA).

Pro’s and Con’s of 23andMe’s ‘Your Family Tree’

I’ll start with the negatives: