Recently I have in touch with a few people over a previous Blog I wrote. Actually there was more than one Blog:

The first contact I had was from Laurie. She commented on my Blog #2 above. She is apparently a second cousin of my children. I see that my son JJ is a 2nd cousin by genealogy and DNA to a Roger: 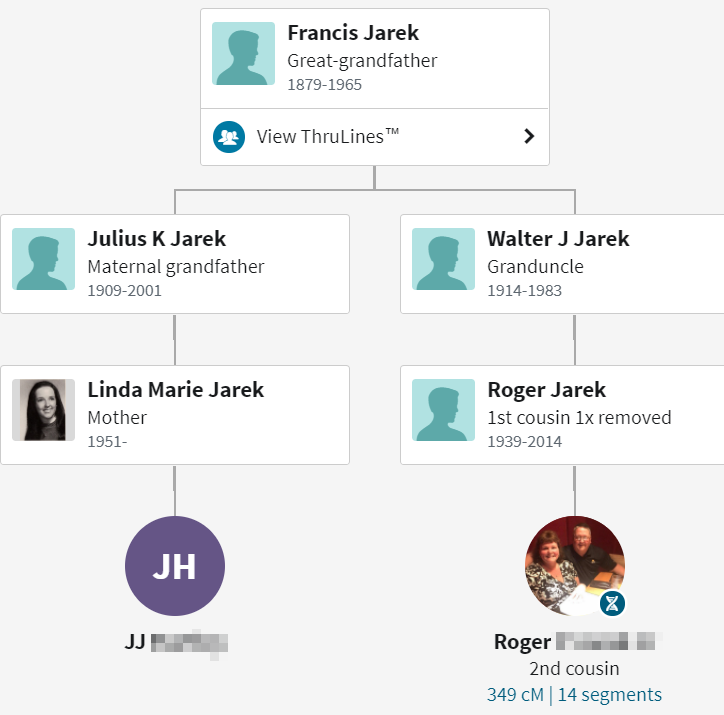 Laurie is also on the Walter Jarek Line. Laurie has done a lot of research and has found that the marriage record for Francis’ wife at the top of the tree may be wrong concerning Antonina. According to Antonina’s marriage record from 1905 in Lowell:

This shows that Francis (or Frank) and Antonina were both born in Austria (today’s Poland). Antonina’s mother is listed as Agnes Letkowicz. Here are Frank and Antonina presumably on their wedding day: 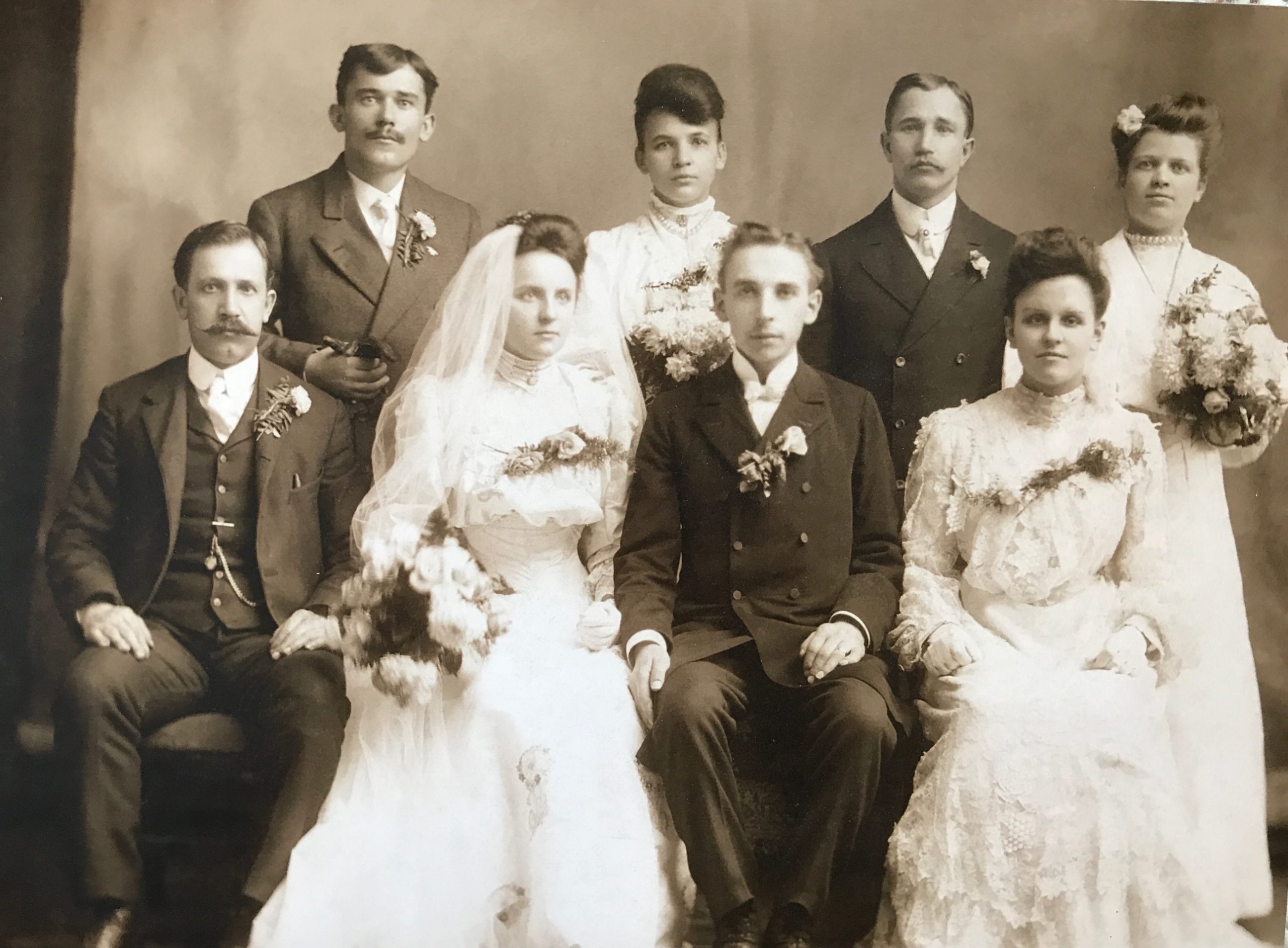 I have that Antonina was 16 when she married. Frank was 26. The photo is quite interesting. It is likely that there are other Jarek and Wozniak relatives in the photo.

This is the 2001 letter that Laurie got from the Polish archives concerning Antonina: 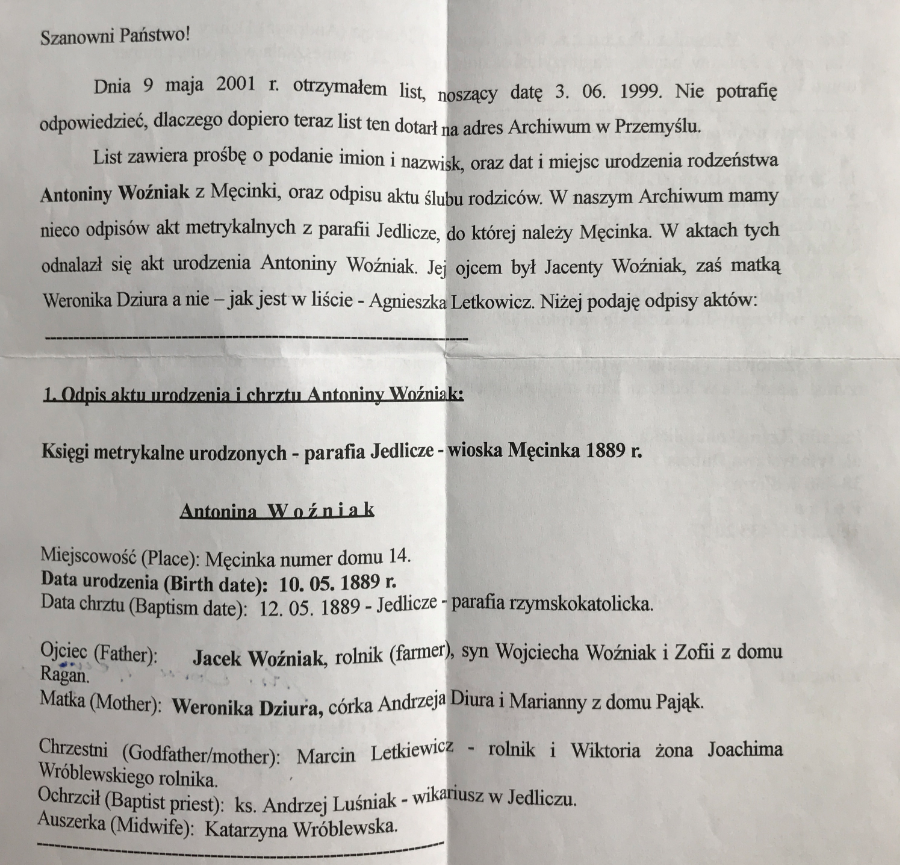 I thank Laurie for taking the time to get this information. There is actually quite a bit of information in this documet. For example, the Godfather was Marcin Lekiewicz. Same surname given as Antonina’s mother in her marriage record. As Laurie pointed out in her email to me, this record also gives the parents of Antonina’s parents. It turns out that this information will correct a mistake I have in the Jarek tree and fill in some blanks. This is what I have now:

Here is my interpretation of Laurie’s letter from the Polish Archives:

My guess is that Polish is one of those languages that the female surname and male surname could be spelled differently. Hence the Dziuria for Weronika and Diuria for her father. I see I have the wrong birth date for Weronika. I’ll have to fix that later.

More on the Jarek Family in Poland from Laurie

Laurie also sent me this document: 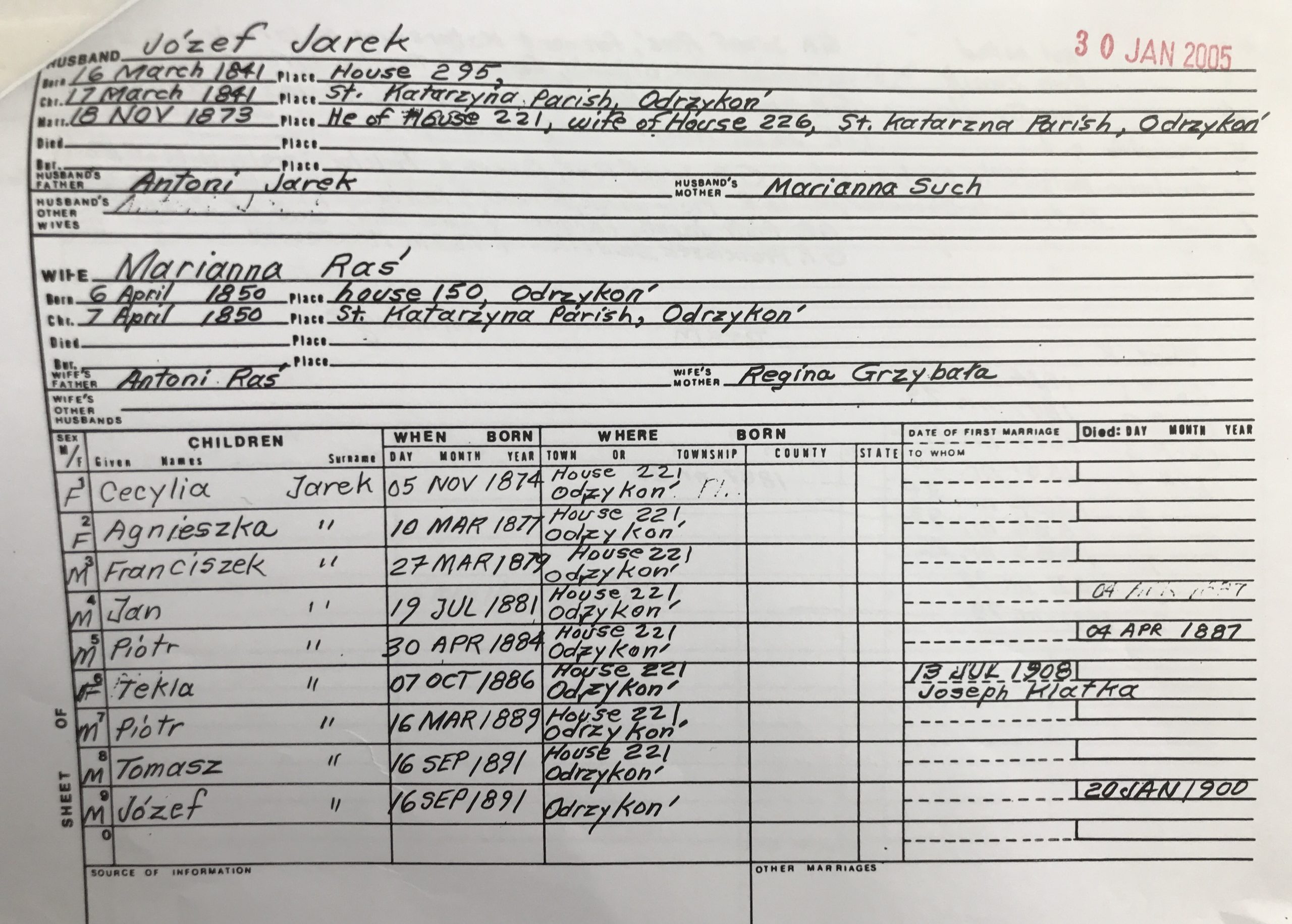 This fills in some of the blanks on the Jarek family. This appears to be a church record or a type of census. I know about Cecylia as she was also in Lowell:

This is my daughter’s DNA match to the Matusik Line through Cecylia. The Jarek family in Poland had 9 children. It appears that 3 died young leaving 6. One married in Poland. However, the death date written for Jan is lighter, so I don’t know if that is right.

Back to the Wozniac Family

Laurie also sent me this: 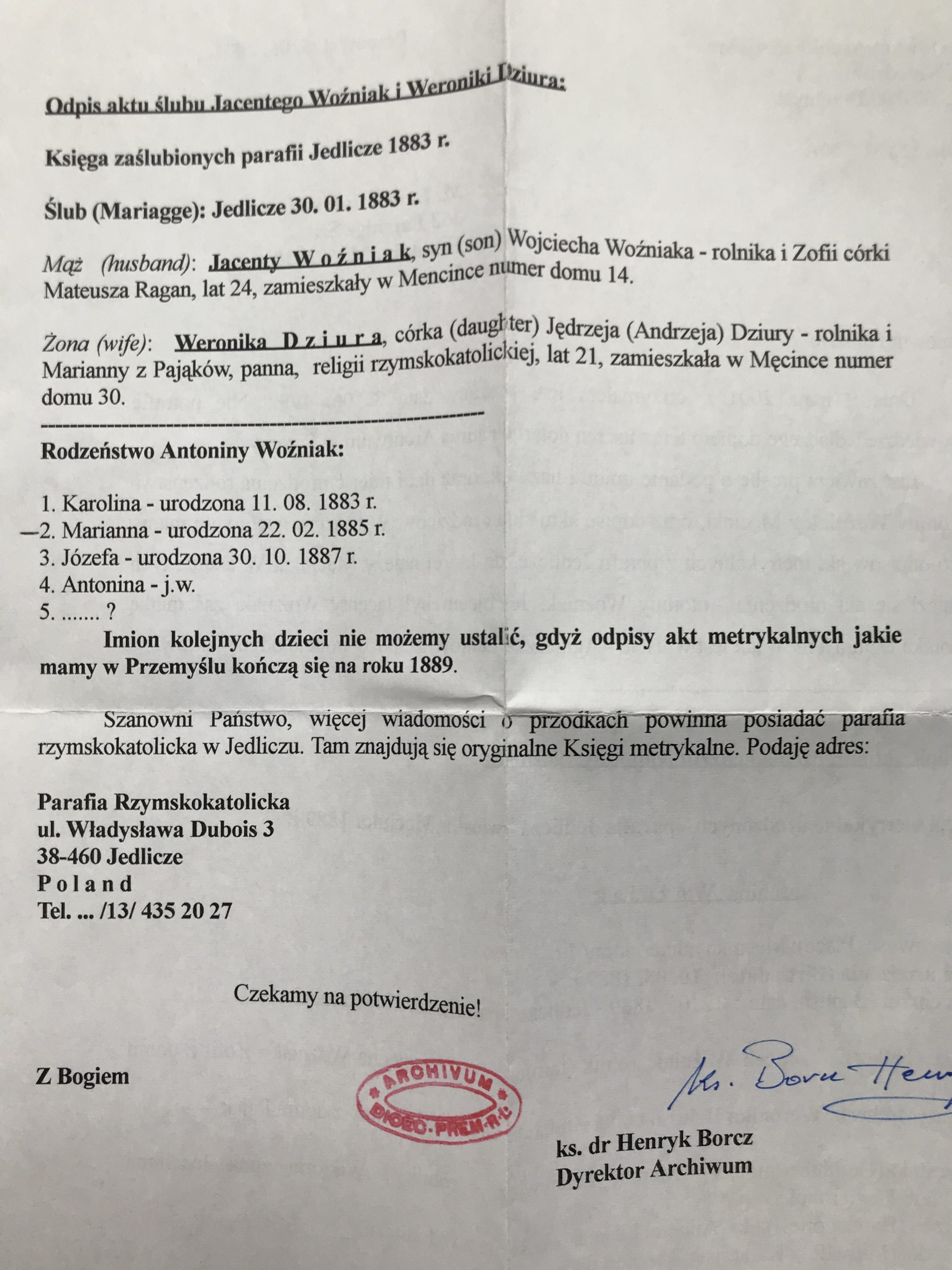 Here Jacek is back to Jacenty. At the top, there is even a Jacentego. This probably all makes more sense if you are from Poland. This appears to be the marriage of Jacenty Wozniak and Weronia Dziura and includes their children. It looks like Jacenty had all girls. Perhaps other immigrated to the US. I wonder what the j.w. means after Antonina. The note appears to indicate that the records they were looking at ended in August 1889. However, I already have the detailed sheet on Antonina from Laurie earlier in the Blog.

The general area of these places is Southeast Poland: 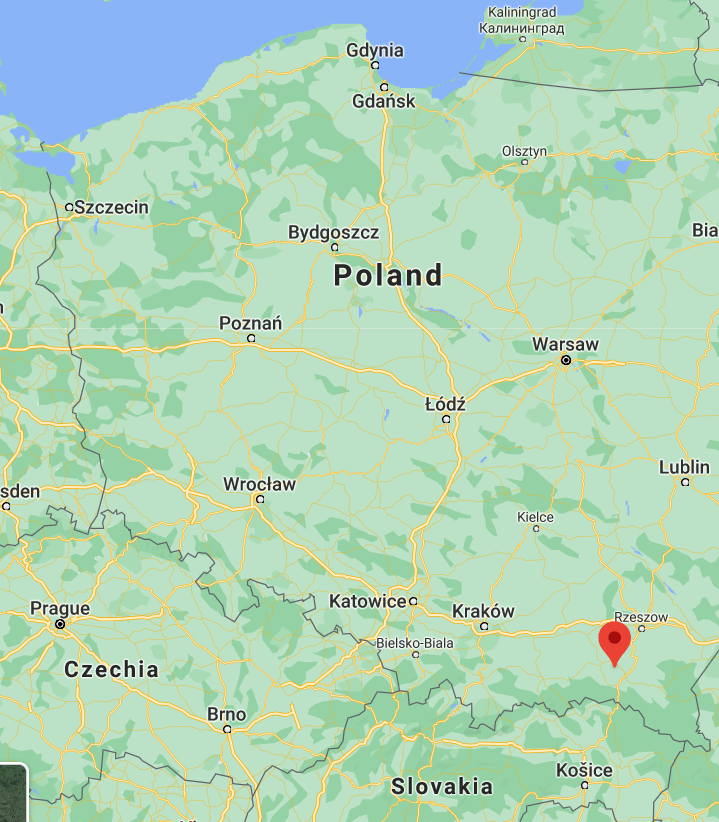 I’ll add the information to my Ancestry tree from the paper above. I see that Jacenty was 24 and Weronika was 21 at the time of their marriage. As they married in January, I’ll assume that they turned 25 and 22 in 1883. That means that Jacenty was born about 1858 and Weronika 1861. This family apparently lived in the Northwestern part of Jedlicze:

Finally, I have this from Laurie: 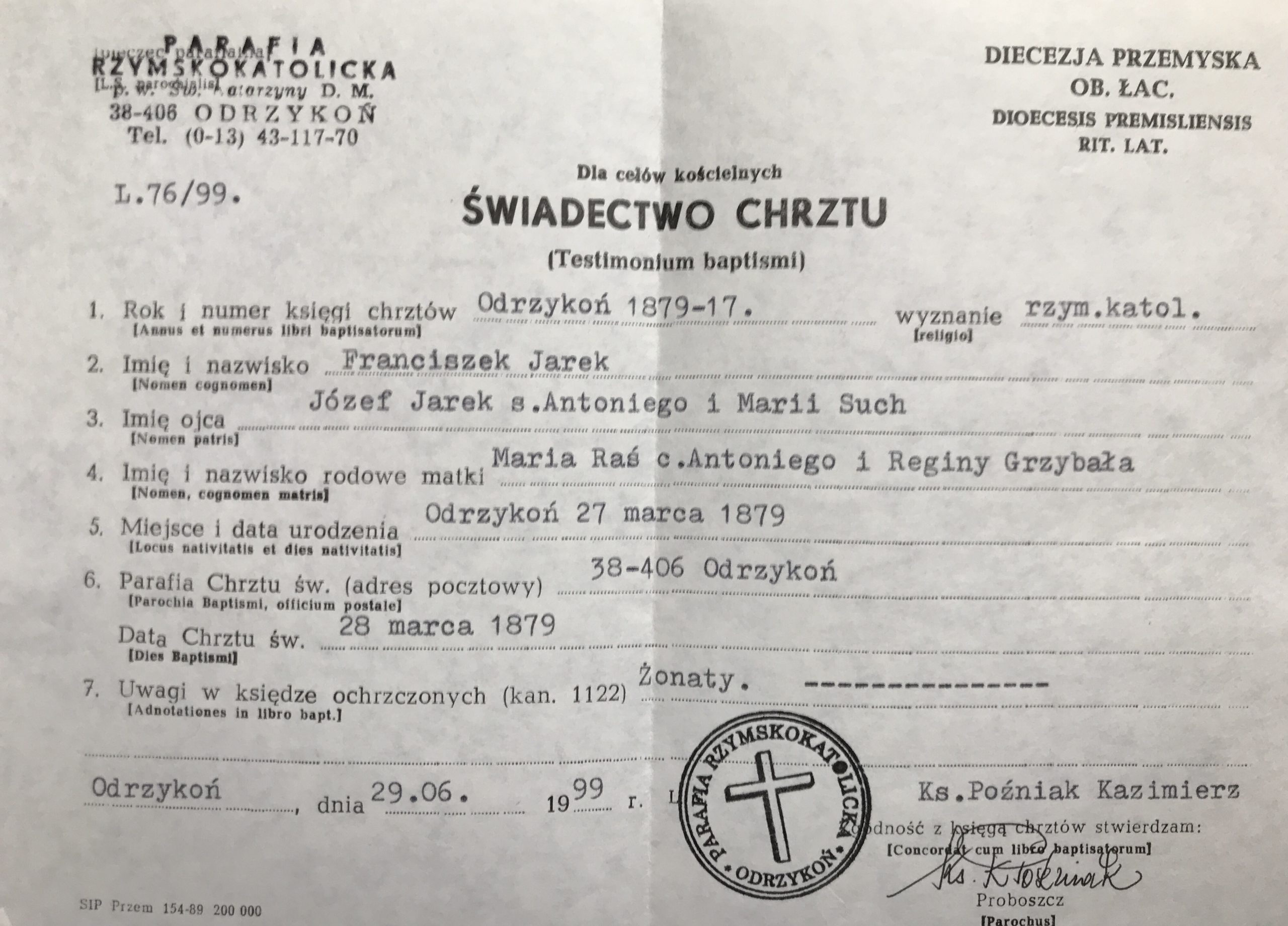 This is a detailed baptismal record as it gives Franciszek’s parents and grandparents.

My Childrens’ Polish Connections with Bill at Ancestry

I tested my childrens’ DNA at Ancestry and have been in touch with Bill. Bill and I have been corresponding since June 2009. In January 2020, Bill wrote:

I got back to Bill and found out that the Was above was an autocorrected Ras as I had guessed. Unfortunately, Bill is a bit beyond me in his Polish genealogy. I’m not sure how this fits in with what I have. As a hint, Bill wrote:

Then most recently in January 2021, Bill wrote me:

This must be where I went wrong. This message from Bill seems to indicate that Antonius Ras was the son of Jacobi and Catharina Blecharczyki.

Here is what I have in my tree now: 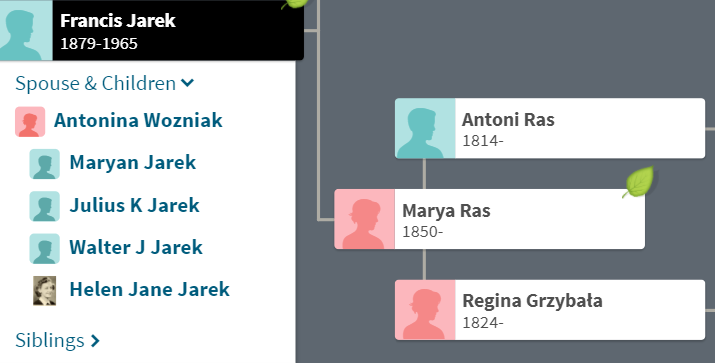 However as I don’t know where I got that, I’ll go with what Bill has. Or, Antonius’ age at marriage could have been off also. Here is my correction:

I’ll keep the parents I had for Regina Grzybala as it seems like I was on the right track there.

Normally I would put a tree together in Excel to see how these all fit together. But apparently I have already done that. Let’s see if it is still right:

That’s odd that I had created a tree about a year ago, but never made the correction on my Ancestry Family Tree. This is interesting because it shows how far back the connection is with Bill. I would not be surprised if there were other ways my children might connect with Bill. For example, the Such name sounds familiar:

The immigrant Francis Jarek’s mother was Marii Such. Perhaps there is also a connection with Bill through his 2nd great-grandmother Katarzyna Such.

It would be possible to expand the Francis Jarek Line on this tree. Here is what Ancestry shows for ThruLines:

ThruLines show DNA connections where there are also genealogical connections on paper. This is the view from my daughter Heather’s perspective. She has 6 matches on the Walter Jarek Line where Laurie is. One good thing in my improving my children’s tree is that Ancestry should be able to make better ThruLine connections similar to the ones above. Ancestry hasn’t figured out the connection that Bill has found yet.