In my previous Blog, I was caught a little off guard as I didn’t know that Rodney had tested for the BigY 700. However, that was good news as now we have a BigY 700 in both the James and Archiald Lines of the Frazer YDNA Tree. One confusing thing about FTDNA is that it is difficult to know when your BigY test has been completed. Here is Rodney’s order history:

This seems to indicate that his BigY was completed on January 14. However there are still more tests ordered by FTDNA. Another way to check is if Rodney’s Private Variants match up with the average Private Variants shown on the Block Tree. [Note: Later in the Blog I show that is not a good way to see if your BigY has completed.]

Jonathan has two. This averages out to 4.5. The Block tree shows an average of 4: 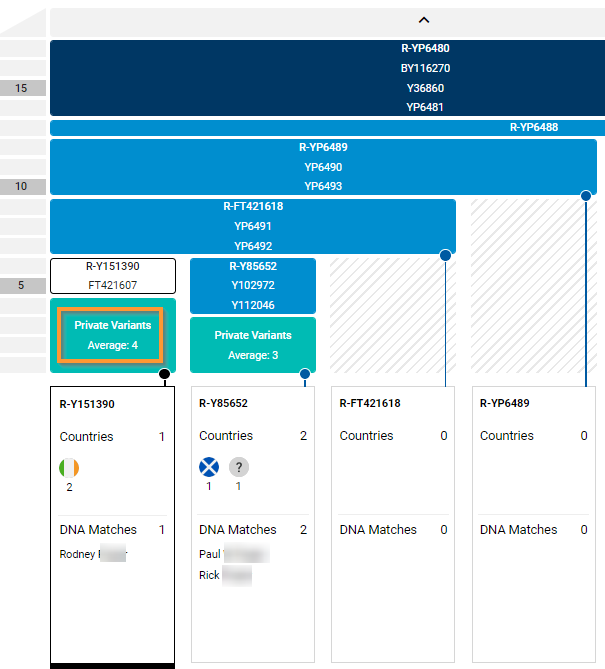 4 is close to 4.5, so I would say that the BigY analysis is complete – except for the Backbone Tests. The number of Average Private Variants went up from 2 to four probably on January 11th when the backbone test was ordered or on on January 14th when FTDNA shows the BigY was completed.

Rick shows that his BigY completed in December:

However, Rick has nine Private Variants:

Paul who is on Rick’s Branch has one Private Variant.

These should be the variants that have formed since Rodney’s and Jonathan’s common ancestor. 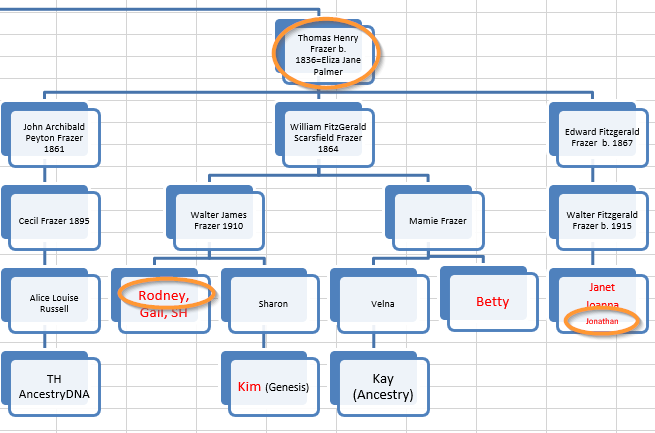 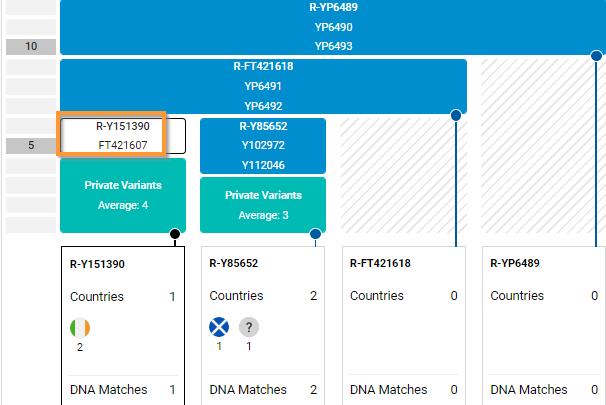 I say, for sure, but the backbone tests seem to be confirming these. The point is that Rodney and Jonathan’s Private SNPs formed after Thomas Henry Frazer in 1836. By the way, I made a mistake in dating the Block Tree in a previous Blog, so I’l correct that here:

The slightly confusing part is that the 1836 is higher on the tree than the 1804. I think that could change as the average number of Private Variants right now appears to be 5 between Paul and Rick under the R-Y85652 part of the Tree. Say that some of the testers were born around 1950. That would mean that this Tree represents 750 years of Frazer YDNA history.

Here is Martin’s take on Rick’s initial results. Martin is the FTNDA administor for the portion of the R1a YDNA Tree that our Frazers are on. These have since changed since Rodney’s BigY 700 upgrade came in.

I don’t see BY84935 on the Block Tree, so if it isn’t there and isn’t on Jonathan’s Private Variant list, where did it go? 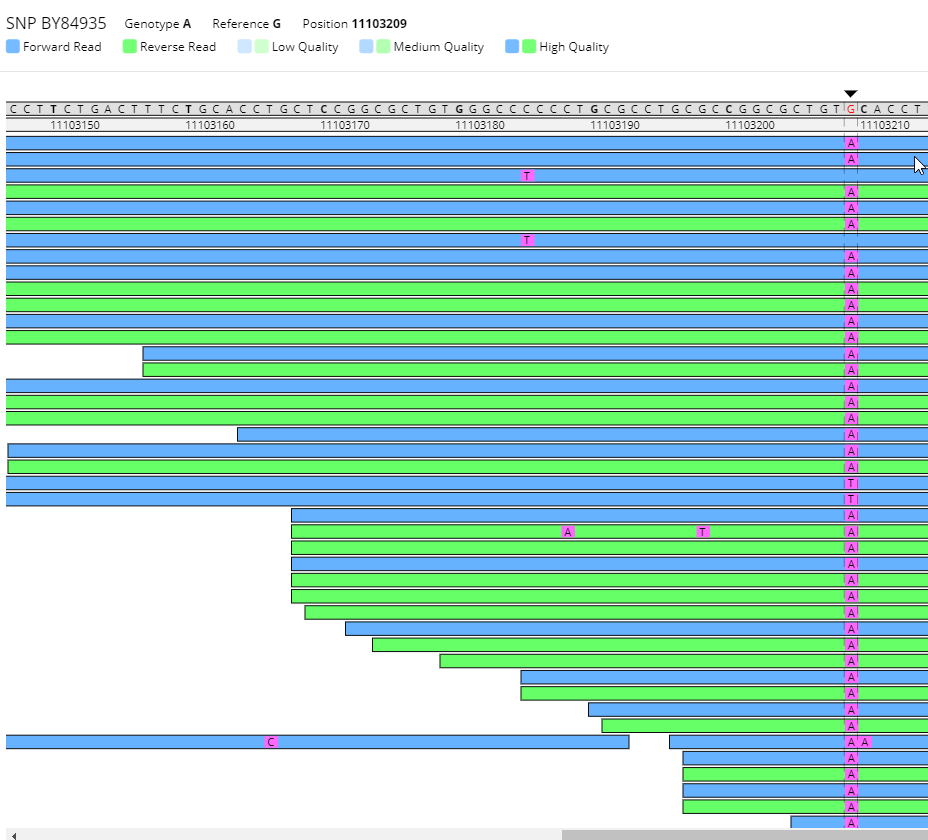 The mutation should be G to A, but Jonathan shows at least two reads that are G to T.

Let’s see how Rodney tested for this. This is now a named SNP, so no longer a Private Variant for Jonathan. I don’t see Rodney having BY84935:

Based on these two test results, this should still be a Private SNP for Jonathan. 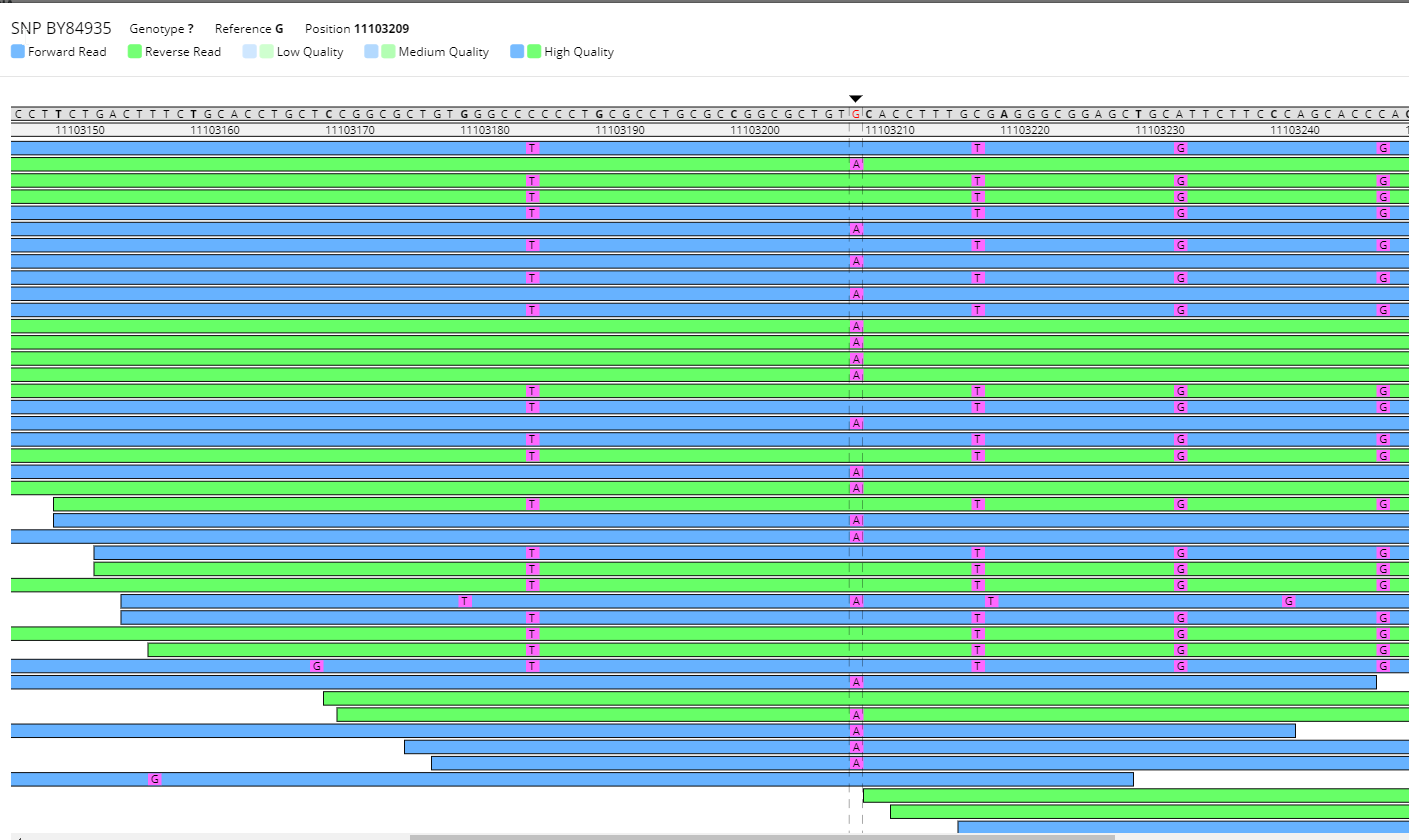 Rick is sometimes positive for this SNP and sometimes not. Also, he seems to have a lot of similar results in this region of the Y Chromosome. Now I see why they took away this Private Variant from Jonathan. 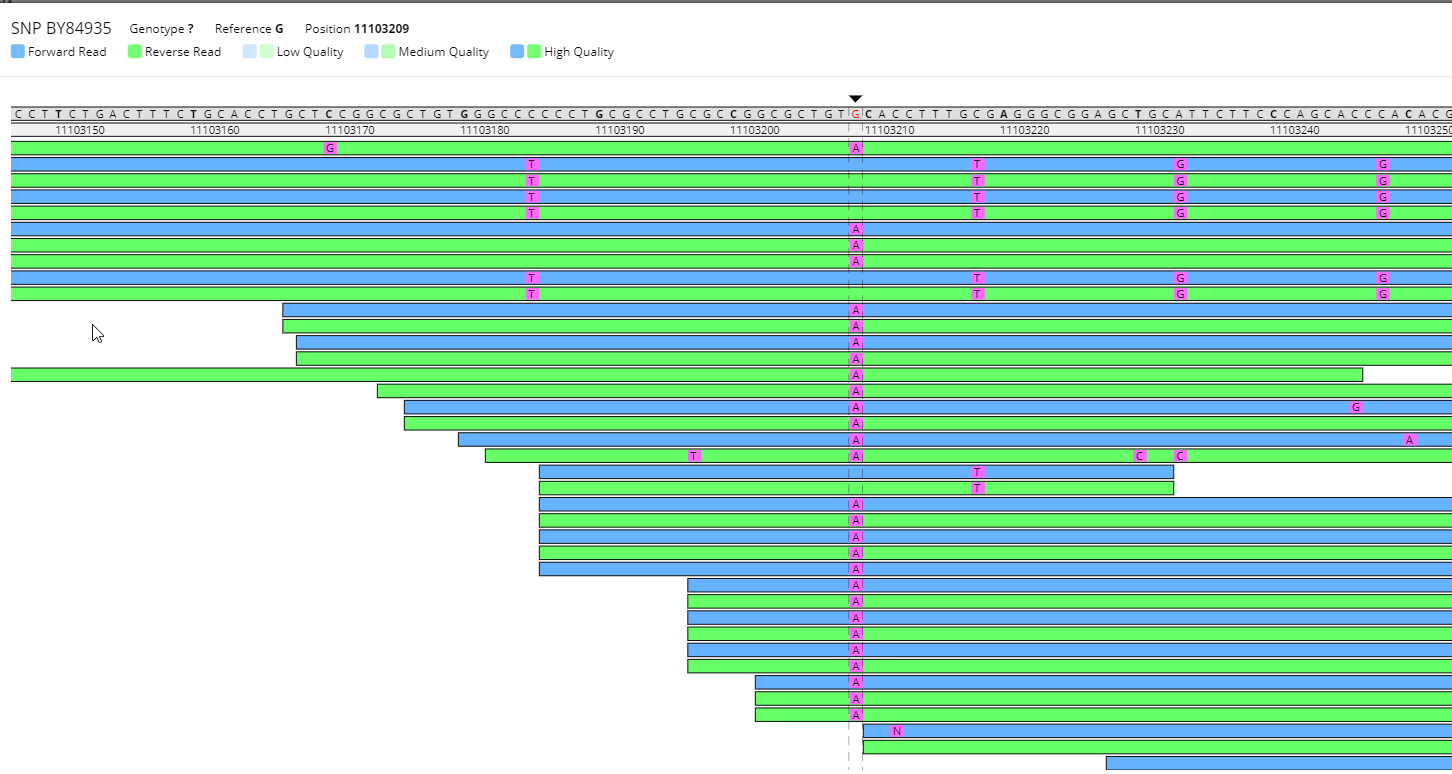 These had to have formed in Jonathan’s line in either Edward, Walter, or Jonathan:

In a sense, these Private Variants are not important from a genealogical point of view. Jonathan already knew he was a second cousin to Rodney. However, if anyone else ever tests positive for these Variants in the future, it will show that they are from this same Edward Fitzgerald Frazer Line.

There is another use of Private Variants. These can be used to date the common ancestor between two people. A number between 83 and 144 years is generally used. However, that time-frame does not work well in the case of Rodney and Jonathan. Their ancestor is believed to be Thomas Henry Frazer born 1836. Even if we take that date from 2021, that is 185 years ago. That means that, at most, there should have been an average of three private variants between Jonathan and Rodney where there are 4 (and actually 4.5). That means that these Variants were forming about every 40 years or about twice as fast as would be expected, on average.

Here are Jonathan and Rodney’s average of 4 Private Variants:

I don’t want to go through each of Rodney’s Private Variants, but I will at least look at one: 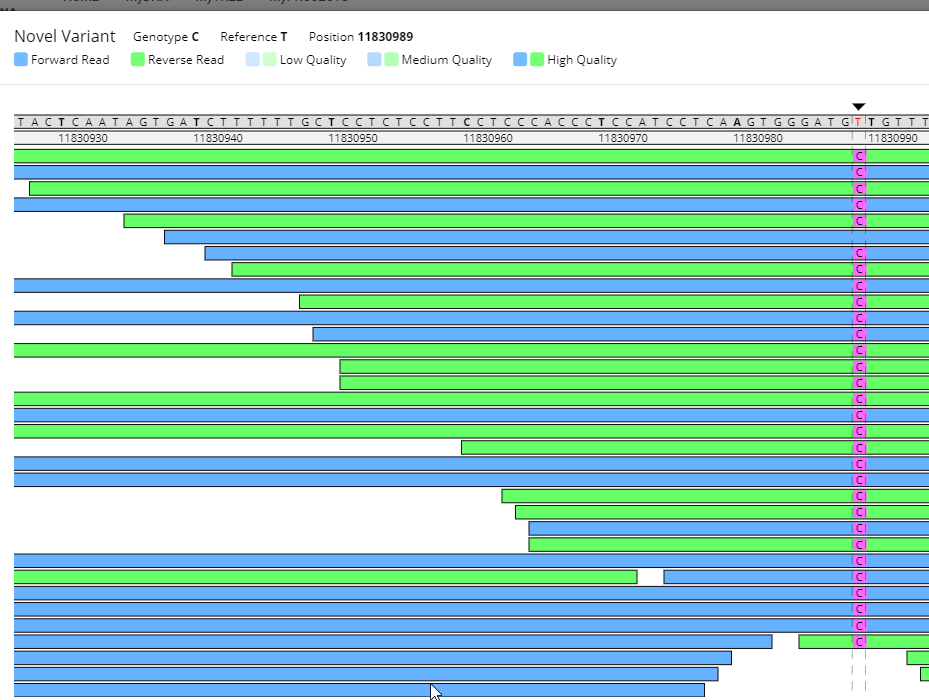 I don’t think that FTDNA shows test results in the browser for Private Variants if you are not positive for them. Here is Jonathan’s downloaded results for this position:

It looks like Jonathan’s results were less than conclusive.

Next, I’ll look at Paul’s results:

Paul was not tested at that position.

Let’s see what Rick has. I need to download his ‘csv’ file. I would expect that Rick would have good results as he has tested for the BigY700:

The good news is that this will take away one of Rick’s Private Variants as he has too many already.

I did a comparison of Rodney’s and Rick’s Private Variants and found one more match: 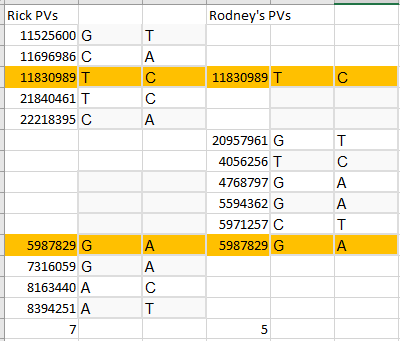 This brings up another reason that Private Variants are important. If they match with someone else’s Private Variant, they form a new SNP. Usually FTDNA will catch that. In this case, they are still in the middle of some of their reviews and have ordered backbone tests for Rodney and Jonathan. It is possible that FTDNA is not sure where to put these new SNPs. This seems to indicate that they are Frazer SNPs, but perhaps they go back even further?

Here is what YBrowse shows: 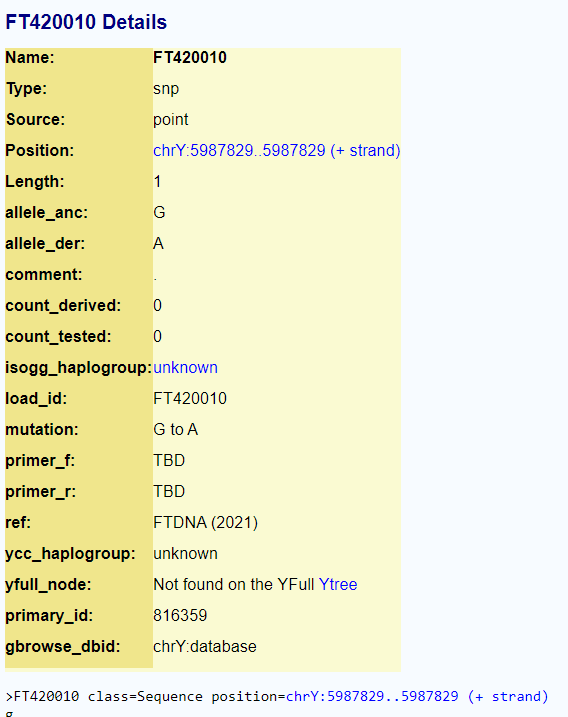 These two SNPs are interesting as YBrowse shows that they are from an unknown Haplogroup. That seems to support my theory that FTDNA doesn’t know where these SNPs belong. Here are Rodney’s test results for the position:

If Rodney and Rick are positive at this Position, then Paul and Jonathan should also be positive.

Paul’s results above were inconclusive.

If it was up to me, I would add these two SNPs to this area:

That means that there would be 8 SNPs in this area instead of the current six. So far, everyone how has tested for these SNPs have been Frazers. However, the six or eight SNPs represent four or five hundred years of history. It would be great to fill in some of the blanks for this time period. It may be that FTDNA hasn’t finished their review or are awaiting the results of the two backbone tests they are doing.

Further, I note this under FTDNA:

This says it could be that the two matches I found between Rodney and Rick could be there because they haven’t properly been properly validated yet. Hence the backbone test which is in process.