I started visually phasing my two children, Heather and JJ’s DNA in this Blog. I was having trouble getting the Steven Fox Visual Phasing Spreadsheet to work, so I just used Excel.

I got this spreadsheet working. It doesn’t like you to cut and paste numbers, so I typed them in. In my previous Blog I mentioned above, I came up with this for Heather and JJ’s Chromosome 5:

Here is the Fox Spreadsheet:

I set the vertical lines to match the areas above where JJ and Heather match each other. Below is JJ and Heather’s maternal grandmother’s match which will be the Rathfelder side. Next I put in Rathfelder and Hartley based on the match below:

Next, I can fill in some Jarek DNA based on matches to Jarek cousin Robert:

Robert matches Heather more than JJ on the right, so that could be a maternal crossover for JJ: 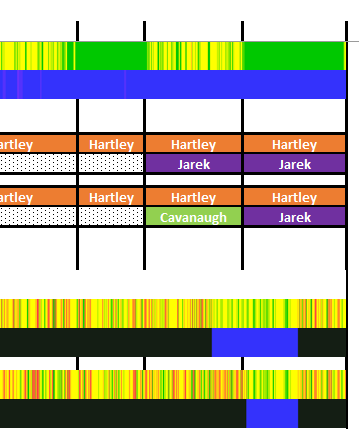 Here is how Heather matches her Cavanaugh cousin Martha on Chromosome 5:

Heather’s match stops at 159M which is where I have a crossover line:

Jarek cousin Robert tested three of his relatives or siblings, I’m not sure which. This one helped:

Robert’s sibling’s DNA match goes over the crossover line, so that cannot be JJ’s crossover. I gave it to Heather. The crossover at 112 was already paternal, so I brought the Jarek DNA over. So far, on Chromosome 5, the Jarek DNA seems to be winning out between JJ and Heather. However, I have a problem. The Fox Spreadsheet has a feature called a segment map. It compares what you have mapped (bottom bar) versus what the actual comparison is between Heather and JJ (top bar).

The top bar needs to match the bottom bar. It does except for the 2nd and third segments I show above.  I missed the crossover before 112. However, I may be able to reason myself out of this jam.

Note that at position 129, there are already two crossovers. I think that there should only be one there. If I move Heather’s Cavanaugh DNA to left, that should solve the problem:

This is what I end up with. Now the bottom bar and the top bar match each other. I still don’t have the first maternal segment defined for Heather and JJ. It would look better if JJ had the crossover at 33.5M. It may be possible to figure this out by cousin matches.

Here are some of JJ’s maternal DNA matches from his match list:

Here is the same portion on Heather’s maternal match list:

This shows that Heather’s matches do go at least a little way through 33.5, so it appears that JJ has the crossover at 33.5M:

This is true because maternal matches cannot go through a maternal crossover. That is true unless someone is related on the order of first cousin or closer.

From this, we see a few interesting things: