Back in March of this year I wrote a Blog about my Latvian cousin Anita and how we matched by DNA. Since then, her sister Inese also tested at MyHeritage. Anita sent me a photo of her sister on the left and herself on the right: 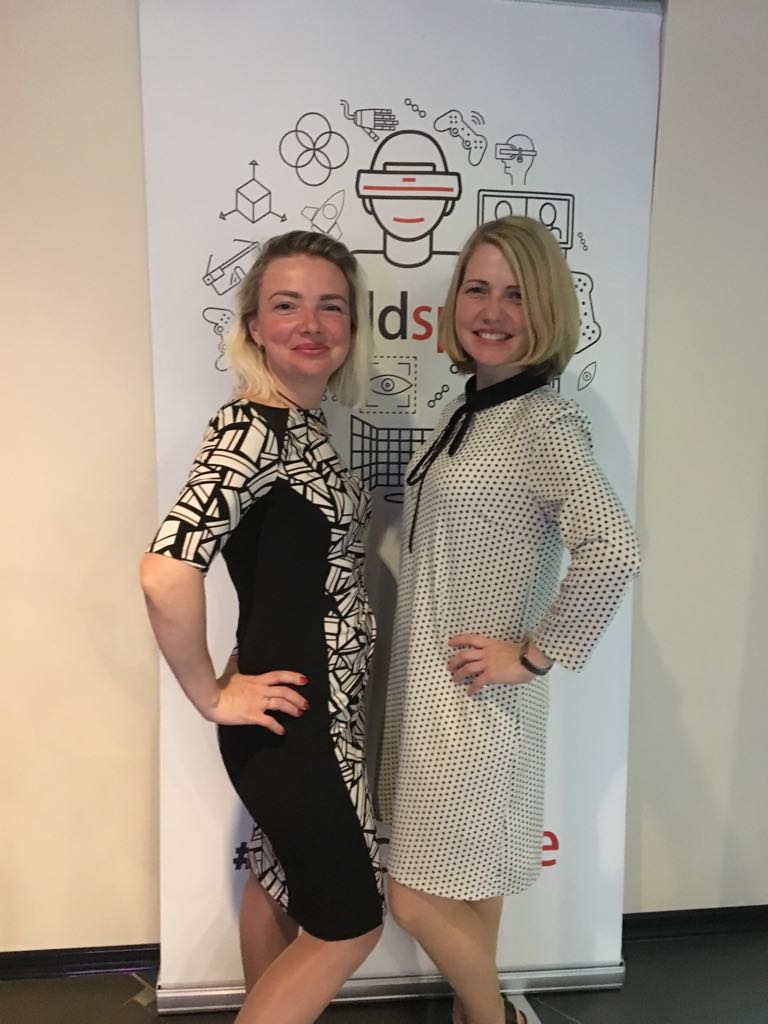 Here is how we match on our Rathfelder side: 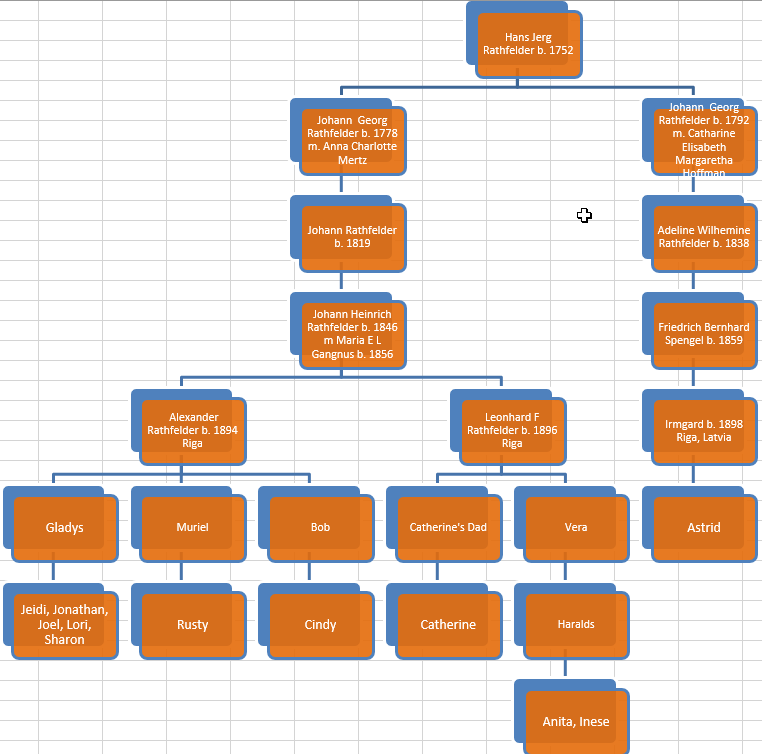 I am in the bottom left box and Anita and Inese are in the lowest box. We both have the common ancestors of Heinrich Rathfelder and Maria Gangnus. I am a second cousin once removed to Inese and Anita and my mother is a 1st cousin twice removed.

My Mother’s DNA Matches with Inese and Anita

Here is how Inese matches with my mother as shown at MyHeritage: 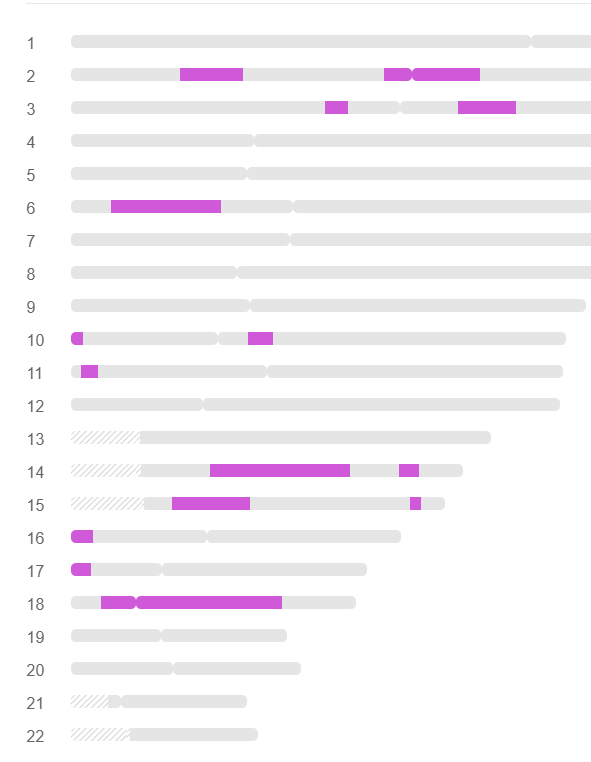 Here is how my mom, Gladys, matches with Inese and Anita:

The most important matches are where Inese matches my mother where Anita doesn’t. That is because this is newly identified DNA areas where we match.

Anita had this question for me:

That is a good question. I think that it does mean that Anita has more Rathfelder DNA than Inese. Anita and Inese got half their DNA from their father Haralds. They got 25% from Vera. They got on average 12.5% from Leo. My mother is Leo’s brother’s daughter. However Leo and his brother Alexander shared about half of their DNA with each other. That means that if all of Inese’s DNA matched all of Gladys’ DNA they could be up around 6.25% theoretically.

We Get Our DNA From Our Grandparents, But Not Equally

In order to answer Anita’s question definitively, we would have to map out all of Anita’s and Inese’s DNA to see exactly how much Rathfelder DNA they got on each Chromosome. They should both have about 25% of their DNA from their grandmother Vera who was a Rathfelder. However, it is possible that Anita has 26% and Inese could have 24% Rathfelder, for example.

That gets to another of Anita’s good questions:

Why me and my sister have only 39,3% shared DNA (44 segments)? I thought that close relatives should share more than 50%, no? Does it means that she for example took more DNA from our mother and me from father? Or almost 40% is a high share?

Here was my answer to Anita:

Siblings are a special case as they share what is called fully identical regions. That means that they can share DNA from the same location from the mother and the father on a specific Chromosome. Perhaps this makes it seem like less DNA is shared. I have 5 siblings tested, so I have plenty to look at! I have 4 of my 5 tested siblings at MyHeritage. They show:

Based on this 40% is pretty high. I share 48.6% with my mother. With my mom, I am only sharing on the maternal side, so there isn’t the same situation as sharing with siblings.

My Match with Inese and Anita

I only got half of my mother’s DNA. Here is how I match with Inese and Anita: 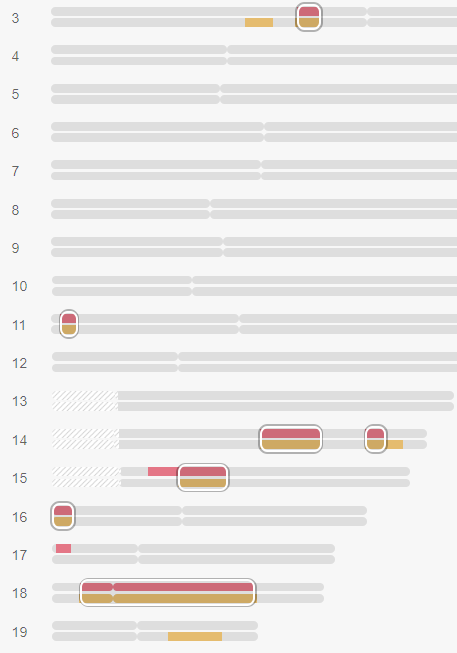 Even though I get half of my mom’s DNA, that doesn’t mean I get exactly half of the DNA that she got from her grandparents. I may get more from some and less from others. Here I didn’t get the DNA that my mom got from her Rathfelder and Gangnus grandparents on her Chromosome 2 and 6 as well as in other places.  However, Inese and I share Rathfelder/Gangnus DNA on part of Chromosome 15 and 17 that I don’t share with her sister Anita.

There is a DNA painting utility on the internet that is fun to play with. Using this I can add the extra DNA on my maternal side on Chromosomes 15 and 17.

The addition on Chromosome 17 is difficult to see as it merges with or is covered up by Schweccheimer/Gangnus. On Chromosome 15 the Rathfelder/Gangnus DNA that we share merges into Nicholson/Ellis. These are ancestors that my mom has that are not shared with Anita or Inese. The point where the color changes is called a crossover. That means that is the spot where the DNA that you have crossed over from one ancestor to another.

I usually don’t write about ethnicity. That is because there are a lot of variations in the results. I have tested with different companies and there are some differences in what I have been told. However, Anita had some questions about her and her sister. I know that the ethnicity or where you came from based on your DNA is a very popular part of the DNA testing and people enjoy looking into this area.

Anita has some good questions:

By MyHeritage results I have 28,5% of Balkan region. My mother says that her parents and grand parents came from Russia and EasternAsia, no one she knows from Balkan. From my father side, Vera comes from Rathfelders, also not Balkan. I don’t know nothing about my father’s father, but almost 30% for me sounds a big part. What does it means?

Here is Inese and my mom compared at MyHeritage:

Inese comes out as 9% Balkan. Note at the top that it says that Gladys and Inese do not have ethnicities in common, but they do share common areas. This is a bit of a surprise. So, for example, Inese and Gladys share a general North and West Europe DNA but Gladys’ is interpreted as English and North  and West European while Inese comes out Irish, Scottish, Welsh and Finnish.

I note that the 10.8% my mom has of North and West Europe is in the area including Germany. 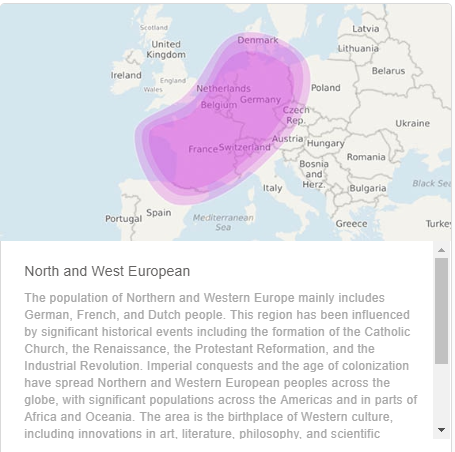 I should note that Germany is a difficult area to determine by DNA. It could be because Germany was a bit of an ancient crossroads. A lot of people lived and passed through there. The Anglo Saxons that came to England, for example, were from Germany. German people also moved up to Scandinavia and other places. My mother also has other German ancestry on her mother’s side that is not related to Anita and Inese.

How Does Anita compare with Gladys? 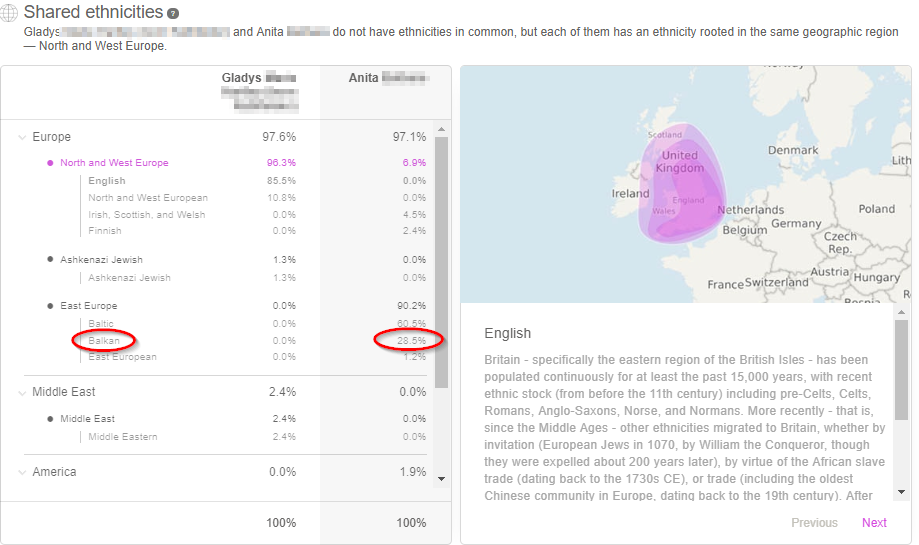 The results are similar, except for the Balkan. Here Anita shows as 28.5% Balkan. Let’s take the average of Anita and Inese and call them 18.7% Balkan. My guess is that Anita’s father’s father had some Balkan background based on the MyHeritage analysis. However, I also like to look at Gedmatch.

Even though Inese and my mom share no ethnicities, I do.

Anita and Inese’s Heritage at Gedmatch

Gedmatch has a lot of tools for looking at what they call ‘Admixture’. However, the documentation of how to interpret the results are often difficult to find. At Gedmatch, I choose admixture and use the Eurogenes program. Here is what Anita looks like: 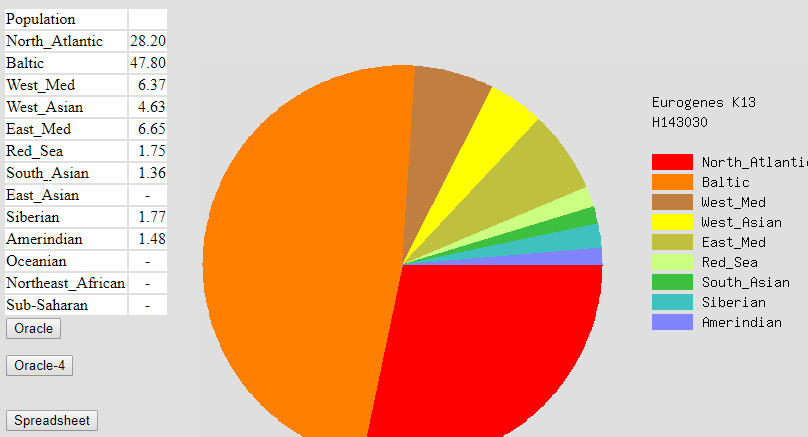 I see the Baltic agrees with MyHeritage. However, Anita has about 48% North Atlantic. The above uses the K13 model. Apparently the K15 is newer and gives this results for Anita:

This basically broke Anita down onto four quarters with some miscellaneous heritage under 4% each. Atlantic seems a bit vague to me but the North Sea is quite specific. Note that there has been no mention of Balkan at Gedmatch for Anita.

A Look at Oracle

Oracle looks at various other possibilities. It is a bit more interesting as it adds some more specific areas based on an interpretation of the general areas in the pie chart above. Here are the Oracle results for the K15 analysis: 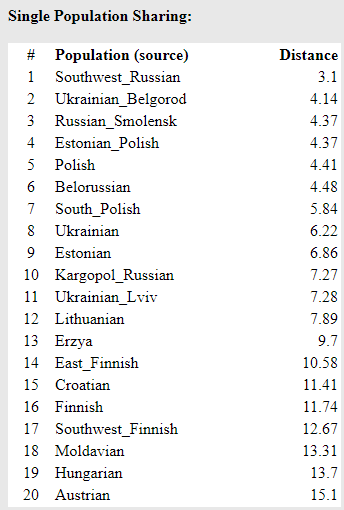 The single population sharing means that if four of Anita’s grandparents were from the same place, where would that place be? Here are the top 20 places. Some of the bottom choices are in the area of the Balkans.

The next option is the top 20 choices if Anita has two different heritages: 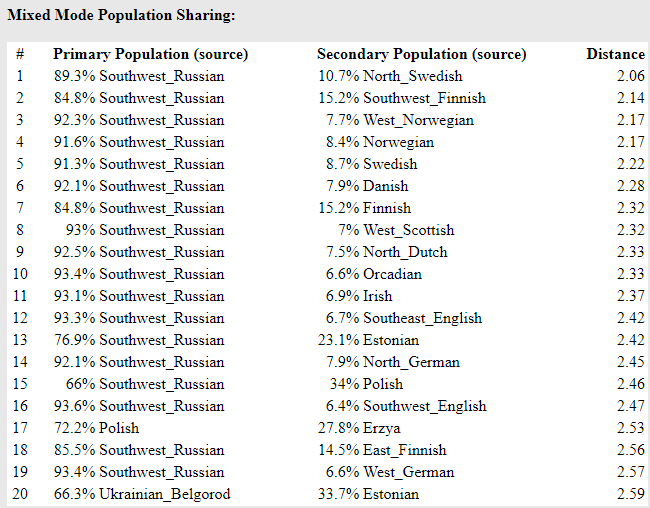 In this model, Southwest Russian comes out strongly with some other secondary choices. Now there are some German choices in there. If I were to do the same thing with the K13 Analysis, the results would be different. Also note that Anita’s great-grandfather was German. A great-grandfather represents 1/8 of one’s heritage. That is 12.5%.

This is where things could get really wild. I chose the K15 analysis and then I compared Anita with my mom, Gladys on Chromosome 18. This should show what they have in common. Here is how Gladys matches Anita and Inese on Chromosome 18:

Gladys matches Anita between about 7.6M and 57.1M. That makes up a large part of Chromosome 18. Here is the Chromosome Painting:

This is difficult to interpret, but it tells me that the ‘German’ match between my Mom and Anita is seen in the DNA in the last row is a mixture of North Sea, Atlantic, West Asian, Eastern European and a bit of Baltic. 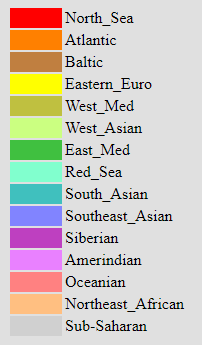 Also by comparing Anita to the bottom row, we can see how Anita and my mom do not match. It seems they don’t match on Siberian and East and West Mediterranean among others.

Inese and Gladys Painted on Chromosome 18

Next I want to make the same comparison between Inese and Gladys. I am wondering if I will get the same results.

This image corresponds to the previous image where I compared Anita with my mom. It looks the same. It makes sense as all three match along this part of Chromosome 18. However, the more I look, I see a few subtle differences. In the area before 40, the black part in the bottom row is thinner between Inese and Gladys. That means that in this area, my mom and Inese have a closer match by ‘admixture’ than my mom and Anita. As Anita, Inese and Gladys match each other between 8 and 58, there could be other subtle differences.

In my and sister’s MyHeritage results 60% is Baltic, but nothing from Germany. It means MyHeritage takes into account that Rathfelders were from Baltic region not Germany? Or how?

Admixture questions can be complicated. There are a few reasons for this. Although the Rathfelders were considered German, they had many other ancestors that made up their ancestry that could have been from other areas. The second reason is this. Germany was a bit of a crossroads. Many other people came into what is now the Country of Germany. What I showed above was that the ‘German’ that Anita, Inese and Gladys share shows in DNA form as East Europe, Atlantic, North Sea, Baltic and some other areas in very small amounts. The United States is considered a melting pot where different nationalities have inter-married. This is true also of England which has had different conquerors and different populations moving to that Country. Likewise many people moved into Germany before staying there or moving on to other places.