I was notified recently of some of my new MyHeritage matches. Some of these matches have been turning out to be very interesting. I was surprised that one of the shared ancestral names was Gangnus. I never see that name in the context of unknown DNA matches. So that piqued my interest.

Here was one note from MyHeritage:

With all these shared ancestors, it would make sense to look at the closest matches first. All of these names looked valid except for Luther. Wolf matches me on my mother’s side. I have a Luther on my father’s side who lived in Colonial Massachusetts. These names that Wolf has appear to be from Hirschenhof. My Rathfelder and other ancestors lived in this German colony in Latvia. Due to the isolated nature of the area, it appears that intermarrying occurred.

Wolf has a good tree at MyHeritage. The names I recognize are on his maternal side:

These are the ancestors that I think we have in common. Also Beidermann to the left of the two blank spots. MyHeritage didn’t mention that we have Hammich in common, but the name sounds familiar to me. Also, I have had other DNA matches with Hassenfuss, so I may be related to that name either by direct descent or a collateral family. This helps confirm where those matches could come from. The places we don’t match are on Hassenfuss, and Heusel. The circles are 5 generations from Wolf, so that would be at the 4th cousin level approximately.

My Mom’s Paternal Side

My mom was born as a Rathfelder Here is her dad’s tree: 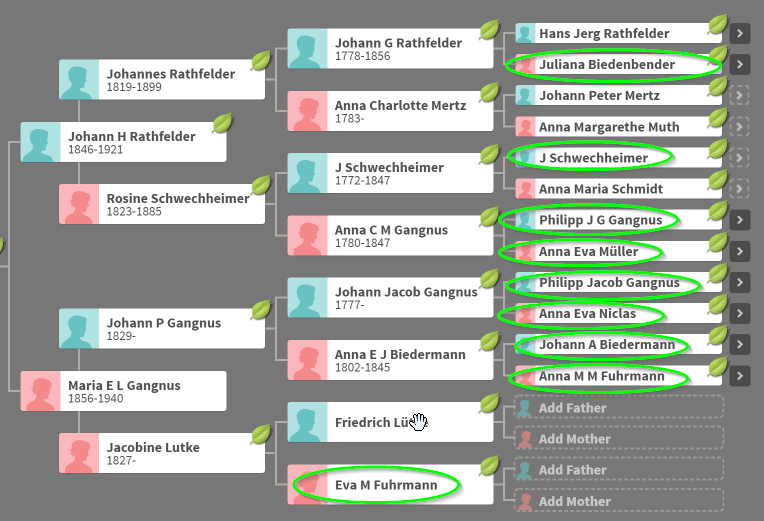 As Wolf was born the same year as me, it seems like I need another generation on his mother’s side. I can create a maternal tree for Wolf, but that will take a while.

Here is part of Wolf’s 6th generation out on his mother’s side:

There are two Schwechheimers, but I am interested in the first one. Here are the details on Wolf’s tree:

Here are two Schwechheimers from my tree:

I have the first Schwechheimer as Johann Markus born in Baden. He was a first generation colonist in his family in Hirschenhof. His son was Johann Gottfried. I had that Johann Markus had these sons:

The last one apparently corresponds with Wolf’s ancestor.

Next, I draw a Schwechheimer Tree:

A Look at Wolf’s DNA 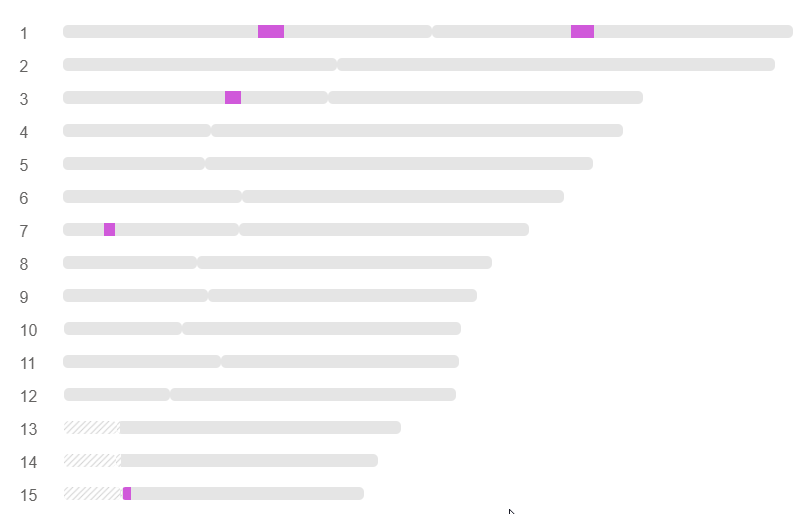 That DNA is shared over four chromosomes in five segments. I suppose some but perhaps not all of this DNA would be Schwechheimer DNA. The fact that we share several segments on the small side could mean that these are for matches that go back a way and it could mean that there is more than one line that we match on. Wolf actually shares a bit less DNA with my mother.

I did not inherit the match my mom has with Wolf on Chromosome 2. I did have a match on Chromosome 15 that my mother did not have. That could mean that the match is on my father’s side, or that it is not a real match. Or perhaps my mom should have matched there. I say it would be better to ignore Chromosome 15.

Anita, Wolf and I form a Triangulation Group (TG). That is when three people all match each other on the same segment. This means that we have a common ancestor.

Here is a chart of DNA-tested descendants of my Latvian great-grandparents:

Rusty, Cindy, and Catherine are not at MyHeritage but have uploaded their DNA to Gedmatch for comparison. That makes Anita and Wolf 6th cousins on this Schwechheimer Tree:

Here is the small area of triangulation as shown on the MyHeritage Chromosome Browser:

The TG is from about position 56 to 60M. My match with Anita is in red and my match with Wolf is yellow above. However, I would hesitate to say that this Chromosome match is from Schwechheimer and no one else.

I mentioned above that I share 41 cM of DNA with Wolf. However, my mother shares 38 cM with Wolf and is a 4th cousin twice removed at least once. Here are some statistics:

My mother and I are both above average for our relationship with Wolf. But as I say, there is more than one line of relationship. 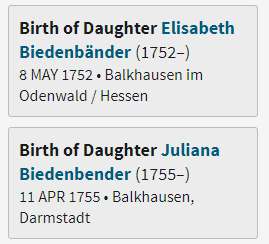 That will lead to a Biedenbinder Tree starting with Tobias:

In this tree, I am actually more distantly related to Wolf as a 6th cousin.

I was curious about the Niclas Connection. I have an Anna Eva, daughter of Johann Jacob Niclas in my tree: 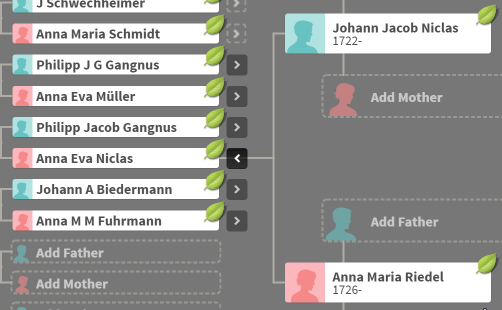 Wolf has a Johann Georg Niclas in his tree. The green leaves are hints in my tree. One of those hints for Johann Jacob is for other people’s trees. There are five trees altogether.  The first tree has Eva Maria b 1757 as a daughter. The second tree is for Niclaus and looks like the wrong guy. The third tree has Johann George and Anna Eva for children. The fourth and fifth trees have just Johann Georg as a child.

Now I need a Niclas Tree:

This is still a 6th cousin relationship for me. The configuration of the tree is the same but the pathways are different.

Wolf’s tree has an Elisabeth Biedermann born 1856 and married to Johann Georg Heusel.

If the dates are right in Wolf’s tree, Elisabeth had Gustav when she was 15. Here is a possible birth record for Elisabeth: 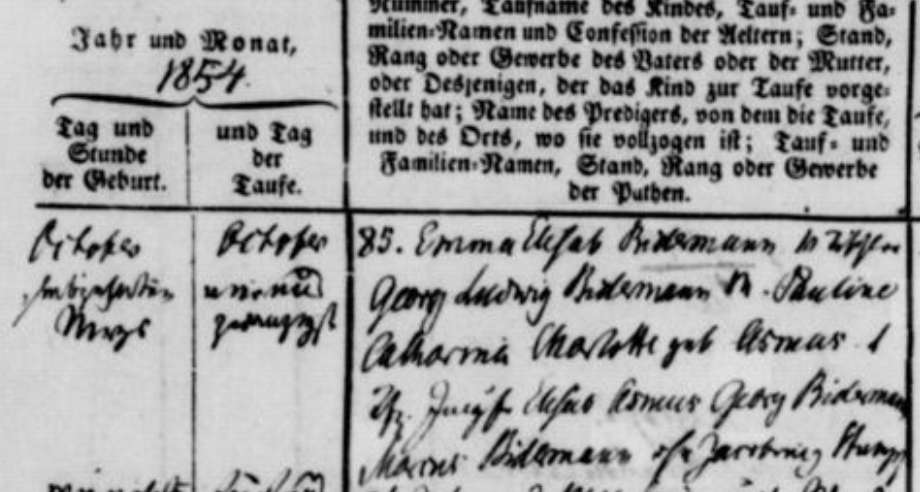 This looks like an Emma Elisabeth Bidermann born to Georg Ludwig Bidermann and Pauline Alharma? Charlotte geb Asmus. Born in October 1854. If this is the right ancestor for Wolf, at least she would be 17 instead of 15 when she gave birth to Gustav.

Wolf has a great tree. However, even with a great tree, it difficult to see all the possible places that connections can be made. I was able to make three connections. It appears that there could be more. I would also like to follow up on other leads.

It helped to build out Wolf’s tree at Ancestry. That way his tree was in a format that was the same as mine and made comparisons easier. It also helped to make most recent common ancestor trees to see what relationship we were to each other on the different lines.

Even though I matched Wolf on many Hirschenhof lines, we didn’t match on my two most recent names of Rathfelder and Gangnus. At least not yet.