Anne is Richard’s closest match on GEDMatch at 2.9 generations and 258 cM, and yet there is no apparent connection… unless of course Christopher Dicks married Elizabeth Crann, which is looking more and more likely.

That comment sent me off to Richard’s results at Gedmatch and his Gedcom. Richard’s great grandfather was Samuel Crann:

Richard had this further interesting information on his second great grandfather John Crann:

Perhaps this Elizabeth Crann, daughter of John Crann could be the one that married Christopher Dicks born around 1812: 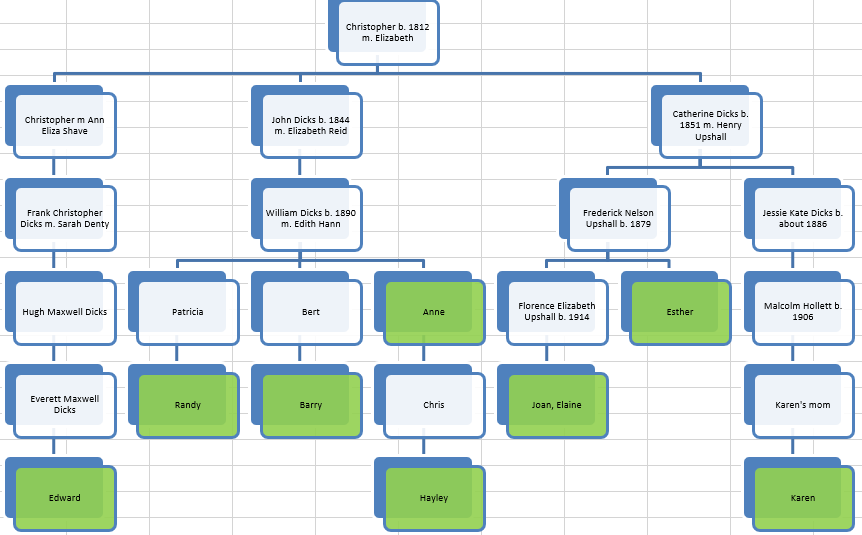 In March 2017, I had theorized that there should be a Crann in one of these two places on Esther’s Tree:

At that point, the two choices were on the Upshall Line or the Dicks Line. Karin is suggesting that it should be on the Dicks Line. In the above diagram, the green boxes are significant as they represent New Zealand Crann Lines with no other Newfoundland contribution. This branch moved from England to New Zealand.

My next step is to draw a tree with some of the proposed Crann connections and see if it makes sense by DNA matches. I already had this tree on my computer that had Richard on it: 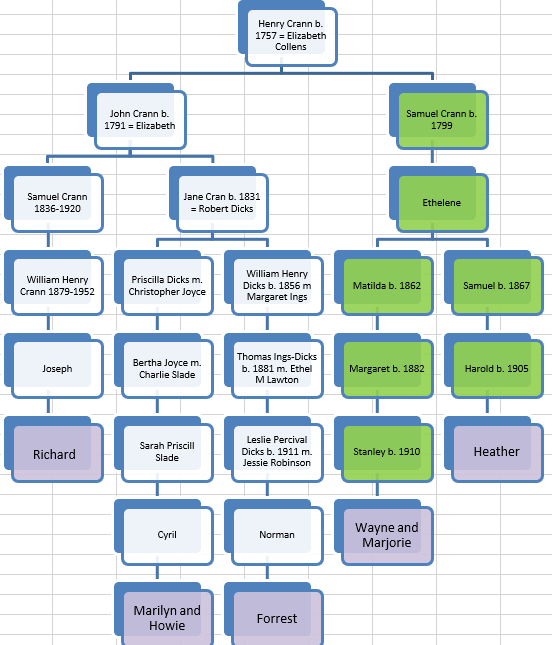 As a point of interest, Forrest came up when I was looking at some of Anne’s DNA matches. Now I just add the Christopher Dicks Line through his putative wife Elizabeth Crann:

It looks like I’ve created a bit of a monster, but this is good in DNA terms. The wider the tree is, the more opportunities for DNA matching. Richard plays a pivotal role here. He is to the left of the Dicks/Crann Line, but he doesn’t descend from the Dicks of the Robert Dicks/Crann Line. He is to the right of the Christopher Dicks/[possible Eliazabeth Crann] Line but doesn’t descend from Christopher Dicks. Hence, Karin’s comment at the top of this Blog which got me going on this line of thinking.

In my plan, the Frank Dicks and John Dicks lines are also important as they don’t descend from Upshalls as far as they know. Remember above, that one of my earlier ideas was that an Upshall could have married a Crann. If they also match Crann, which it appears they may, that would show that the Crann  DNA matches are through the Dicks marriage to Elizabeth Crann that we are considering here.

Here I found a few others that were also in Crann Lines. Anne has good matches to our three New Zealand Crann descendants. Some testers that I haven’t looked at yet, Randy and Elaine as well as Karen all match with the New Zealand Crann descendants. Ken is still a mystery and appears to match on a different line. Notice he has huge matches until he gets to the NZ Group. Then basically nothing. This also holds true for Forrest and Sandi.

Triangulation Groups are where three or more people match each other on the same segment of the same Chromosome. This is an indication of a common ancestor. In this case we are looking for a common Crann Ancestor.

Starting From the Bottom: Chromosome 22 TG

This was the big TG, so I’ll start here: 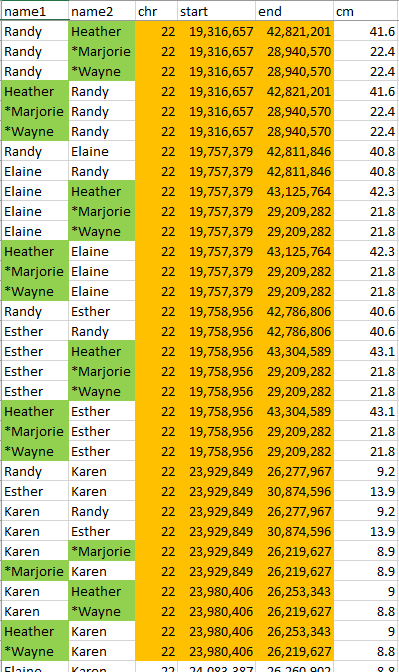 It seems ironic that the biggest TG is on the smalled chromosome. Here we have Heather, Margorie, Wayne, Randy, Elaine, Esther and Karen. If we go down a little more, Anne is also in there:

This shows that Anne has something called a crossover at about 35M. That is why she doesn’t start matching Heather, Elaine and Esther until then. Marjorie, Wayne and Heather are our tested and proven NZ Crann descendants. I have them highlighted in green on my spreadsheet.

This turns into quite the criss-cross:

[Edit: Edward in the bottom left is placed wrong in this tree and the next. For the correct tree see previous trees. He should be on the same level as Hayley. I am missing his female Shave ancestor here.]

Karen actually plays an interesting part in all this. She is in a TG with Randy and Esther. Because Karen is 7 generations away from Henry Crann, the match is just not there with the New Zealand Cranns. However, she triangulates on Elizabeth (now more apparently Crann). Randy, Anne, Elaine, Esther, Marjorie, Wayne and Heather triangulate on the same area of Chromosome 22 with Henry Crann born 1757. The confusing part is why Anne and Elaine don’t also match Karen in that same segment. It turns out that Elaine and Karen do match from 24 to 26M. And as I mentioned above Anne’s Crann DNA doesn’t kick in until later at 35M. 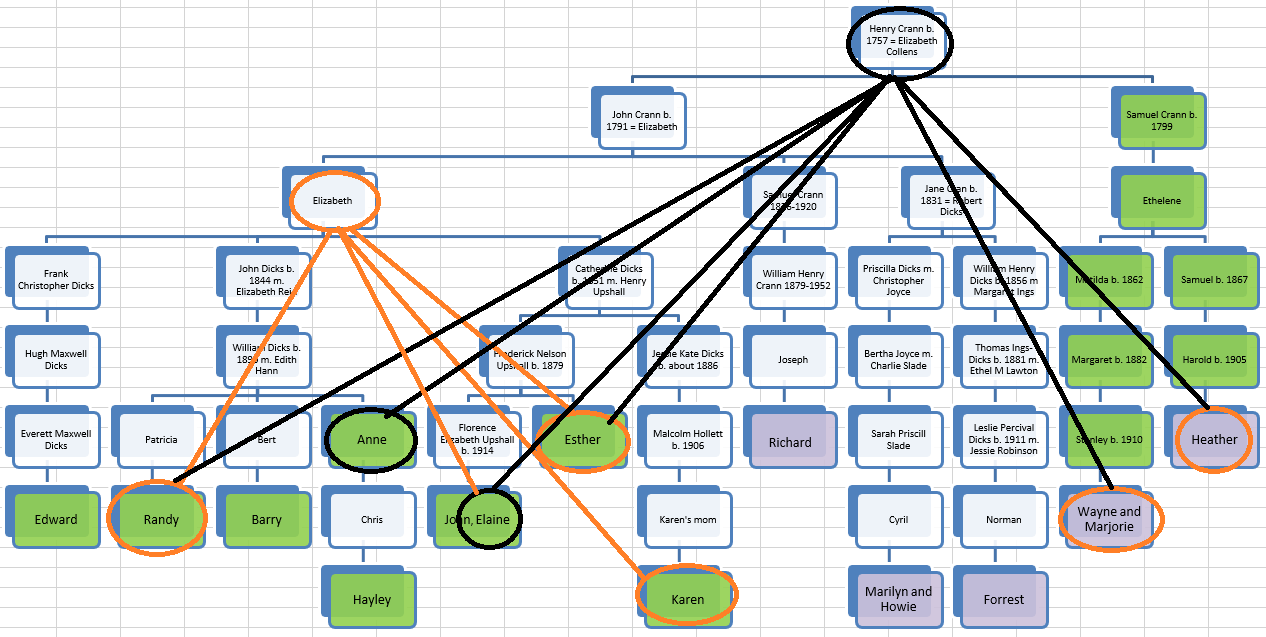 So I added an orange line from Elaine to Elisabeth [most likely born Crann] Dicks. The point that I was trying to make above is that there is a TG focusing in on Elisabeth and a TG focusing in on Henry Crann. Both those TGs are using the same segments, so they represent the same Crann DNA. Technically, the DNA could be from Collens who was the wife of Henry Crann above, but by the time it made it’s way down to the two different lines, it could be considered Crann DNA. It looks like I had identified this TG back in March, 2017, but at that time, I only had Esther, Heather, Wayne and Marjorie in it. The fact that we have so many more testers now, including three that don’t appear to be descending from Upshall should put Elizabeth as Christopher Dicks’ husband.

This one is less complicated: 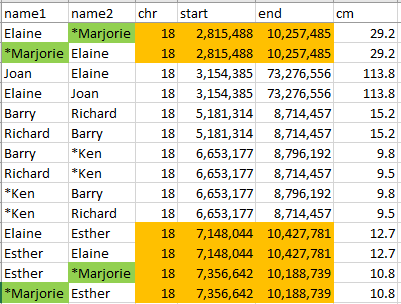 This has just NZ Marjorie and Elaine and Esther. Note that Elaine matches her sister Joan here but Joan matches neither Marjorie nor Esther. How is that? The answer is that Elaine and Joan as sisters may match on their maternal and/or paternal sides. Elaine is matching Margorie on her maternal [Upshall] side. Joan is matching Elaine on her paternal [Ellis] non-Newfoundland side. It’s good to keep in mind with DNA that we all have a paternal and a maternal side.

Just to be confusing, it looks like Richard, Ken and Barry are in a TG with each other in the same area. This would most likely be a Dicks TG – unless they have some other non-Crann common ancestor.

A TG on Chromosome 10 with Molly, Howie, Marjorie, Wayne and Heather has been pointed out in my previous Blog.

This TG has Heather, Wayne and Richard.

The Last NZ TG On Chromosome 2

This is the last TG going up from Chromosome 22 where I started: